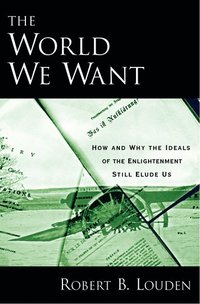 The World We Want

How and Why the Ideals of the Enlightenment Still Elude Us

av Robert B Louden
Inbunden Engelska, 2007-10-01
449
Köp
Spara som favorit
Skickas inom 10-15 vardagar.
Fri frakt inom Sverige för privatpersoner.
Finns även som
Visa alla 3 format & utgåvor
The World We Want compares the future world that Enlightenment intellectuals had hoped for with our world at present. How and why are the two worlds so different? To what extent is (and isnt) our world the world they wanted, and to what extent do we today still want their world? How large is the gap between Enlightenment ideals and present reality, and why is it so large? Louden explores these questions and advances an argument that the widespread
Enlightenment assumption that external institutional changes lead to internal attitudinal changes is not well supported by historical experienceand that many of the ideals advocated by the Enlightenment do not fit with human nature.
Visa hela texten

Stephen Gaukroger MIND This is an ambitious project on a number of levels...There is much value in Louden's book

<br>Robert B. Louden is Professor of Philosophy at the University of Southern Maine. He is the author of Kant's Impure Ethics: From Rational Beings to Human Beings (OUP, 2000) and Morality and Moral Theory: A Reappraisal and Reaffirmation (OUP, 1992), co-editor and translator of Kant, Anthropology, History, and Education (CUP, 2007) and Kant, Lectures on Anthropology (CUP, 2008), translator of Kant's Anthropology from a Pragmatic Point of View(CUP, 2006), editor of Schleiermacher's Lectures on Philosophical Ethics (CUP, 2002), and co-editor of The Greeks and Us (University of Chicago Press, 1996).<br>