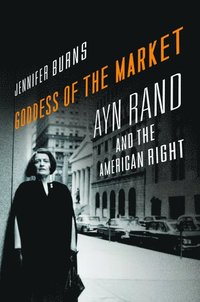 Goddess of the Market

Ayn Rand and the American Right

av Jennifer Burns
Inbunden Engelska, 2010-01-14
308
Köp
Spara som favorit
Kan tyvärr inte levereras innan julafton.
Finns även som
Visa alla 3 format & utgåvor
Worshipped by her fans, denounced by her enemies, and forever shadowed by controversy and scandal, the novelist and philosopher Ayn Rand was a powerful thinker whose views on government and markets shaped the conservative movement from its earliest days. Drawing on unprecedented access to Rand's private papers and the original, unedited versions of Rand's journals, Jennifer Burns offers a groundbreaking reassessment of this key cultural figure, examining her life,
her ideas, and her impact on conservative political thought.
Goddess of the Market follows Rand from her childhood in Russia through her meteoric rise from struggling Hollywood screenwriter to bestselling novelist, including the writing of her wildly successful The Fountainhead and Atlas Shrugged. Burns highlights the two facets of Rand's work that make her a perennial draw for those on the right: her promotion of capitalism, and her defense of limited government. Both sprang from her early, bitter experience of life under
Communism, and became among the most deeply enduring of her messages, attracting a diverse audience of college students and intellectuals, business people and Republican Party activists, libertarians and conservatives. The book also traces the development of Rand's Objectivist philosophy and her relationship with Nathaniel
Branden, her closest intellectual partner, with whom she had an explosive falling out in 1968.
This extraordinary book captures the life of the woman who was a tireless champion of capitalism and the freedom of the individual, and whose ideas are still devoured by eager students, debated on blogs, cited by political candidates, and promoted by corporate tycoons.
Visa hela texten

Lewis A. Erenberg, Journal of Historical Biography Burns has crafted a superb biography that traces her influence, places Rand in historical context, avoids both condemnation and hagiography, and undercuts the view, fostered by Rand herself, that she was a self-created genius.


Brian Doherty, The Washington Times A smart assessment of Rand's life and ideas and how they influenced each other... As Ms. Burns successfully demonstrates, Rand's ideas have remained an important part of the American ideological mix, especially in how she honored the creative powers of American business in a free market to improve human lives. Ms. Burns' readers will see Rand still has the power to instruct on the meaning and scary implications of government growth in the age of Barack Obama.


Washington Monthly Magazine Burns has the edge, though, in identifying Rand's intellectual legacy. She describes Rand as "the ultimate gateway drug to life on the right" elaborating: "Just as Rand had provided businessmen with a set of ideas that met their need to feel righteous and honorable in their professional lives, she gave young people a philosophical system that met their deep need for order and certainty.


The New Yorker Burns, a professor of history, more ably situates Rand within and against the world of American conservatism


U.S. Intellectual History A well-written and absorbing biography of Rand, it also places her ideas and influence in three overlapping contexts. Goddess of the Market goes a long way toward explaining both the popularity of Rand's ideas and their somewhat marginalized status.


M. L. Jackson, CHOICE This is a significant contribution to Rand scholarship and an engaging read for anyone interested in Rand or 20th-century politics and intellectual life


Tribune At last! A well-balances book about Ayn Rand (1905-82), the guru of selfishness. After all the attack memoirs and right-wing adulation, Jennifer Burns has finally given us an intellectual biography


Martin Jenkins, Chartist a well researched and readable account of Objectivist philosophy, Rand's life and accounts of the sometimes misanthropic personalities if not the philosophy involved.


John Krueckeberg, Literature & History Burns contributes so much to understanding the philosophies behind Rand's literature, libertarian thinking, and the philosophical underpinnings of the American right, that this book is sure to be of interest to many.

<br>Jennifer Burns is Assistant Professor of History at Stanford University. A nationally recognized authority on Rand and conservative thought, she has discussed her work on The Daily Show and Book TV and has been interviewed on numerous radio programs.<br>