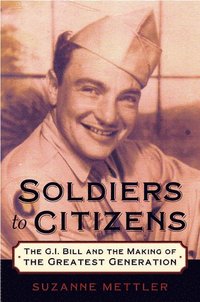 The G.I. Bill and the Making of the Greatest Generation

"As a beneficiary of the GI Bill, I can't recommend enough Suzanne Mettler's examination of the Bill and its transformative effect on the lives of so many veterans like me. It's clear that Mettler has come to know the GI Bill through the veterans she met in the course of her research, and the result is as accurate a description of its design, implementation, and of the experiences of the soldiers who benefited from it as I have read. This book is a must-read not only
for those interested in the Greatest Generation but also for anyone who wants to know what it takes to make a great country." Senator Bob Dole

"The GI Bill changed my life after my service in the Korean War just as it changed the lives of the World War II veterans whose experiences Mettler brings to light. They provide unassailable evidence of how a federal program revolutionized America for the better. But do not treat Soldiers to Citizens as simply a portrait of the past. This book offers a potent and timely counter argument to those in power who seek to privatize every non-military function of
government and remove all sense of shared sacrifice or shared benefit."Charles Rangel, U.S. Congressman

"Mettler's terrific new book explores a little-known, but momentous chapter in the history of the 'Greatest Generation' of America's WWII veteranswhy they became the most civic-minded generation in our history. She shows that the GI Bill was one of the great success stories in American public policy, a story that is astonishingly relevant to debates today about civic renewal and the role of government. For contemporary civic reformers this book is must reading."
Robert D. Putnam, Malkin Professor of Public Policy, Harvard University, and author of Bowling Alone: The Collapse and Revival of American Community

"Breaks new ground in the study of the Greatest Generation. Mettler shows conclusively how the GI Bill not only helped male veterans improve "their stake in society" but how it also gave them the direction and tools to improve the society in which they had a stake." Montgomery C. Meigs, General, US Army, Retired, and Louis A. Bantle Chair, Maxwell School of Syracuse University

"Suzanne Mettler has written a magnificent book, showing how the GI Bill enabled soldiers returning from World War II to become fully participating citizens in American democracy. Not only did the GI Bill open access to education; it delivered benefits in a dignified way and demonstrated that government could make a positive difference in the lives of individuals and the nation. The experiencesand many individual voicesof the World War II generation come through
loud and clear in this book. Scholars and students will gain a fresh perspective on the effects of public policy on citizen participation. And general readers will see what government at its best can do to spread opportunity and enrich citizenship in America."Theda Skocpol, Victor S. Thomas
Professor of Government and ...

<br>Suzanne Mettler is Alumni Associate Professor of Political Science at the Maxwell School of Citizenship and Public Affairs, at Syracuse University. She is the author of the prize-winning Dividing Citizens.<br>