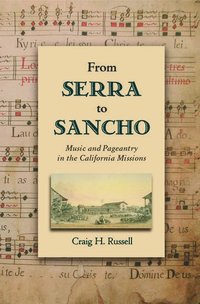 From Serra to Sancho

Music and Pageantry in the California Missions

Kristen Dutcher Mann, The Journal of Eighteenth-Century Music Craig Russel's new monograph is a wonderful addition to the rich body of musicological and historical literature

Bloggat om From Serra to Sancho

<br>Craig H. Russell, Professor in the Department of Music at California Polytechnic State University, is steeped in the music of the Hispano-American world, having published over 100 articles in the field. He collaborated with Chanticleer on four compact disks--two of which received Gramophone award nominations. His compositions have been performed worldwide, including major orchestral concerts in Carnegie Hall, the Kennedy Center, the Sydney Opera House, and Disney Hall.<br>