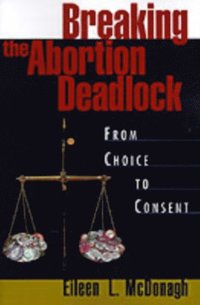 From Choice to Consent

av Eileen McDonagh
E-bok (PDF - DRM), Engelska, 1996-10-24
639
Ladda ned
Spara som favorit
Laddas ned direkt
Läs i vår app för iPhone, iPad och Android
Finns även som
Visa alla 1 format & utgåvor
For over twenty years the abortion debate has raged, with each side entrenched in unyielding positions. This book breaks the impasse by using pro-life premises to reach pro-choice conclusions. While it is commonly assumed that state protection of the fetus as a form of human life undermines women's reproductive rights, McDonagh instead illuminates how it is exactly such state protection of the fetus that strengthens, rather than weakens, not only women's right to an abortion, but even more significantly, women's ability to call on the state for abortion funding. McDonagh's approach, by bridging the divide between pro-life and pro-choice advocates, revolutionizes the abortion debate in a way that opens up a whole new avenue for resolving the abortion conflict and advancing women's rights. McDonagh reframes the abortion debate by locating the missing piece of the puzzle: the fetus as the cause of pregnancy. After exposing the myths on this subject, her exacting analysis presents the scientific and legal evidence that the ultimate source of pregnancy is the fetus. The central issue then becomes what the fetus, as an active agent, does to a woman's body during pregnancy, whether that pregnancy is wanted or not. McDonagh graphically describes the massive changes produced by the fetus when it takes over a woman's body. As such, pregnancy is best depicted not as a condition that women have a right to choose but rather as a condition to which they must have a right to consent. Abortion, therefore, does not rest on the intensely debated principle, stated in Roe, that women have a right to be free from state interference when choosing privately what to do with their own bodies. Instead, as McDonagh's book explains, abortion rights flow inevitably from women's more established right to consent to what another agent does to their body. Specifically, women have a right to resist an unwanted intrusion by a fetus as well as to receive help from the state to stop such an intrusion. Moving abortion rights from choice to consent has broad legal and cultural ramifications tapping into the very cornerstone of the American political system: consent. McDonagh unravels the consequences of extending to pregnant women the same guarantees of bodily integrity and liberty possessed by others in our society. Specifically, she shows why a woman who does not consent to be made pregnant by a fetus, not only has a right to terminate pregnancy, but why the state violates constitutional due process and equal protection guarantees when it fails to provide her with the same protections against nonconsensual intrusions by a fetus as it provides against nonconsensual intrusions by other parties. This book pivotally strengthens, therefore, not only women's right to abortion but also abortion funding. By providing new grounds both for the public funding of abortion and for the removal of government restrictions on abortions, it lays the foundation for enhancing women's rights through major policy changes in legislatures and courts.
Visa hela texten