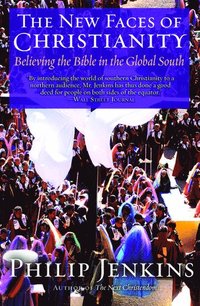 The New Faces of Christianity

Believing the Bible in the Global South

Howard Peskett, ANVIL This book by Jenkins... show[s] that Christians of the South are ripe for arriving at many new and vibrant readings of the Bible,

<br>Philip Jenkins, one of the world's leading religion scholars joined Baylor University's Institute for Studies of Religion as Distinguished Professor of History and Co-Director for the Program on Historical Studies of Religion.He has published widely on contemporary religious phenomena, but is best known for the highly acclaimed The Next Christendom: The Coming of Global Christianity. The book served as the basis for a highly influential cover story for Atlantic Monthly, also written by Jenkins, which garnered widespread media attention.<br>

ACKNOWLEDGMENTS; PREFACE; 1. Shall the Fundamentalists Win?; 2. Power in the Book; 3. Old and New; 4. Poor and Rich; 5. Good and Evil; 6. Persecution and Vindication; 7. Women and Men; 8. North and South; APPENDIX 1: PSALM 91; APPENDIX 2: THE EPISTLE OF JAMES; ABBREVIATIONS; NOTES; SCRIPTURE INDEX; INDEX