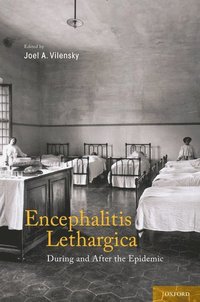 During and After the Epidemic

Doody's Listings By extracting and synthesizing core information from monographs and journal articles published in various languages before, during, and after the epidemic, the author provides an unprecedented level of analysis in a readable format.


ACN Online Great read. If you want a page of disease to rule in or out this is the book where you will find them.

<br>Dr. Vilensky became interested in aspects of the history of neurology after a career investigating the neurological control of movement. He has published numerous articles on various aspects of neurologic history including on the work of the father of neurosurgery, Sir Victor Horsley. Dr. Vilensky authored a book on the WWI chemical warfare agent, lewisite, which surprisingly had a critical role in the treatment of a severe neurologic disease, hepatolenticular degeneration (Wilson's disease). He became interested in encephalitis lethargica after acquiring some films from the 1920s of these patients. Besides the current book, Dr. Vilensky has authored five scientific articles on the disease. <br>The Foreword by Dr Oliver Sacks is under copyright (c) to Dr Sacks.