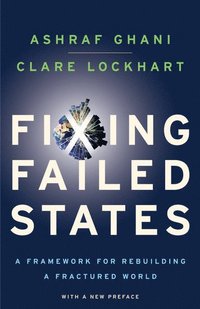 A Framework for Rebuilding a Fractured World

av Ashraf Ghani
Häftad Engelska, 2009-11-26
209
Köp
Spara som favorit
Fåtal ex i lager. Skickas inom 1-2 vardagar.
Fri frakt inom Sverige för privatpersoner.
Finns även som
Visa alla 2 format & utgåvor
Today between forty and sixty nations, home to more than one billion people, have either collapsed or are teetering on the brink of failure. The world's worst problemsterrorism, drugs and human trafficking, absolute poverty, ethnic conflict, disease, genocideoriginate in such states, and the international community has devoted billions of dollars to solving the problem. Yet by and large the effort has not succeeded.
Ashraf Ghani and Clare Lockhart have taken an active part in the effort to save failed states for many years, serving as World Bank officials, as advisers to the UN, and as high-level participants in the new government of Afghanistan. In Fixing Failed States, they describe the issuevividly and convincinglyoffering an on-the-ground picture of why past efforts have not worked and advancing a groundbreaking new solution to this most pressing of global crises. For the paperback
edition, they have added a new preface that addresses the continuing crisis in light of ongoing governance problems in weak states like Afghanistan and the global financial recession. As they explain, many of these countries already have the resources they need, if only we knew how to connect them to global
knowledge and put them to work in the right way. Their state-building strategy, which assigns responsibility equally among the international community, national leaders, and citizens, maps out a clear path to political and economic stability. The authors provide a practical framework for achieving these ends, supporting their case with first-hand examples of struggling territories such as Afghanistan, Sudan, Kosovo and Nepal as well as the world's success storiesSingapore, Ireland, and even
the American South.
Visa hela texten

<br>"Clear, taut language makes it accessible at almost any level of education...a roadmap to a groundbreaking new solution to this most pressing of global crises."--United Press International<br>"Ashraf Ghani is a practitioner turned theoretician. Drawing on his background at the World Bank and as the first post-Taliban finance minister of Afghanistan, he together with Clare Lockhart develops a comprehensive framework for understanding the problem of state-building. He argues persuasively that this will be the central challenge underpinning world order in our globalized age, and offers practical solutions for meeting it."--Francis Fukuyama, author of State-Building: Governance and World Order in the 21st Century<br>"This book is an important and timely alarm bell for the world's next crisis-and proves that no one knows more about how states function (and don't) than Ghani and Lockhart. We ignore their remedies at our peril."--Hernando de Soto, author of The Mystery of Capital: Why Cap

<br>Ashraf Ghani played a central role in the design and implementation of the post-Taliban settlement in Afghanistan, serving as UN adviser to the Bonn process and as Finance Minister during Afghanistan's Transitional Administration. He has worked at the World Bank and taught at Johns Hopkins and Berkeley universities. He has been nominated for the job of Secretary General of the United Nations and considered for the job of President of the World Bank. He chairs the Institute for State Effectiveness. <br>Clare Lockhart is co-founder and director of the Institute for State Effectiveness, established in 2007 to advise leaders on transformation of countries from instability to stability. From 2001 to 2005, she lived and worked in Afghanistan, first as a member of the UN negotiation team and then advising the Afghan Government, leading design of several national initiatives. She now advises leaders on a range of countries across Asia, Africa and the Americas. She was educated at Oxford, Harvard and is a member of the Bar of England and Wales.<br>

Acknowledgments Introduction Part One: Defining the Context 1. The Creeping "Sovereignty Gap" 2. Reversing History 3. Webs and Flows of Cooperation 4. Failed Politics 5. The Promises and Perils of Aid Part Two: Defining the State For the Twenty-First Century 6. Toward a Multifunctional View of the State 7. The Framework: The Ten Functions of the State Part Three: A New Agenda For State Building 8. International Compacts: Sovereignty Strategies 9. National Programs: The Challenge of Implementation Conclusion: Collective Power Afterward Notes Index