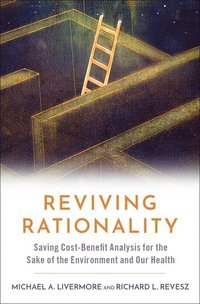 av Michael A Livermore
Inbunden Engelska, 2021-01-05
315
Köp
Spara som favorit
Finns även som
Visa alla 2 format & utgåvor
Reviving Rationality explains how Donald Trump destabilized the decades-long bipartisan consensus that federal agencies must base their decisions on evidence, expertise, and analysis. Under the Trump administration, inconvenient evidence has been ignored, experts have been sidelined, and analysis has been used to obscure facts, rather than inform the public. The results have included haphazard and incoherent policy, social division, defeats in court, a
demoralized federal workforce, and a loss of faith in government's ability to respond to the pressing problems facing American society. The hard work of rebuilding a rational regulatory system will fall to future administrations.
Visa hela texten

Jonathan Wiener, Yale Journal on Regulation Mike Livermore and Ricky Revesz have written a terrific critique of politicized dysfunction in regulation, and a call to restore analytic rigor.


Jed Stiglitz, Yale Journal on Regulation Reviving Rationality is an important read from two of the legal academy's foremost experts on the administrative state. It provides a nice history of cost-benefit analysis, how it has evolved analytically, institutionally, and how it has mapped to our changing political landscape.


Rachel Potter, Yale Journal on Regulation A serious affliction requires potent and targeted medicine. And the situation that Livermore and Revesz so deftly describe in Reviving Rationality is clearly serious. The authors recount nothing short of a siege undertaken by the Trump administration to undermine the institution of cost-benefit analysis (CBA). They carefully and convincingly detail the administration's tactics, ranging from manipulating the social cost of carbon to adopting policies that
focus on costs and ignore regulatory benefits. This is a book that should be read widely by academics and practitioners alike.


Caroline Cecot, Yale Journal on Regulation With Reviving Rationality, Michael Livermore and Richard Revesz ("L&R") have produced another important, timely, and provocative work on the use of cost-benefit analysis in government decisionmaking ... L&R's book is important exactly because it reminds us what was at stake during the Trump Administration.


Daniel Farber, Yale Journal on Regulation One of the book's important contributions is its meticulous documentation of just how incompetent, if not dishonest, the Trump Administration was in its regulatory analysis. The book also shows how often the Administration violated the practices of its predecessors, Democratic and Republican alike. Many of the individual episodes Livermore and Revesz discuss are familiar, but the level of detail and range of incidents they provide will be useful to readers with many
different perspectives on government regulation.


Amy Sinden, Yale Journal on Regulation Mike Livermore and Ricky Revesz should be applauded for doing the near-impossible in Reviving Rationality spinning a lively and engaging narrative about the driest of subjects, the conduct of cost-benefit analysis (CBA) by government bureaucrats. The story they tell has all the elements of a classic morality play a hero (cost-benefit analysis), a villain (Donald Trump), and an epic struggle between good and evil (or, more specifically, between
rationality and irrationality). I certainly enjoyed the ride, and there's no qu...

Richard L. Revesz is the Director of the American Law Institute. He is a fellow of the American Academy of Arts and Sciences, a member of the Council on Foreign Relations, and a senior fellow of the Administrative Conference of the United States. After judicial clerkships with Chief Judge Wilfred Feinberg of the US Court of Appeals for the Second Circuit and Justice Thurgood Marshall of the US Supreme Court, Revesz joined the NYU School of Law faculty in 1985, served as dean from 2002 to 2013, and co-founded the Institute for Policy Integrity at NYU School of Law. In 1994 and 2007, Revesz received the American Bar Association's award for the best article or book on administrative law and regulatory practice published during the prior year. Michael A. Livermore is the Edward F. Howrey Professor of Law at the University of Virginia. He is the author (with Richard L. Revesz) of Reviving Rationality: Saving Cost-Benefit Analysis for the Sake of the Environment and Our Health (Oxford University Press) and Retaking Rationality: How Cost-Benefit Analysis Can Better Protect the Environment and Our Health (Oxford University Press). His edited volume (with Daniel N. Rockmore) Law as Data: Computation, Text, and the Future of Legal Analysis helped define the field of computational legal analysis.