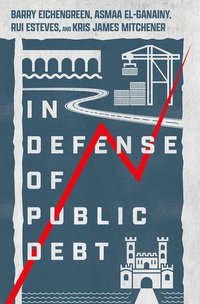 In Defense of Public Debt

av Barry Eichengreen
Inbunden Engelska, 2021-11-25
269
Köp
Spara som favorit
Finns även som
Visa alla 2 format & utgåvor
Public debts have exploded to levels unprecedented in recent history as governments responded to the Covid-19 pandemic and economic crisis. Their dramatic rise has prompted apocalyptic warnings about the dangers of heavy debts - about the drag they will place on economic growth and the burden they represent for future generations. This book adds the other side of the equation: drawing on history, it provides a defence of public debt.
Visa hela texten


Olivier Blanchard, Professor of Economics Emeritus, MIT, and Senior Fellow, Peterson Institute for International Economics Discussions of sovereign debt are always the same, yet always different. Why debt finance? How much can we borrow? Should creditors worry? The authors take us on a fascinating 2500-year tour of sovereign debt through the ages, the discussions, the successes and the failures. The bottom line: Well-used, debt finance has been and is precious. The latest example: The use of debt during the Covid crisis. A must read for anybody interested in current debt debates.


David Wessel, Director, Hutchins Center on Fiscal and Monetary Policy, Brookings Institution An exceptionally comprehensive and readable history of public debt from ancient Greece to modern Greece and from Argentina to Australia to Asia to America. This book is rich with detail, studded with lessons learned, forgotten and learned again, and packed with analytical perspective that reflects decades of scholarship. It is a timely reminder to governments, lenders, investors and ordinary citizens that if you don't know where you've been, you probably don't know
where you are going.


Niall Ferguson, Milbank Family Senior Fellow, Hoover Institution, Stanford Repeatedly since the 1980s, Americans have been told to worry about the size of the federal debt. And yet the debt has continued to grow absolutely and as a share of gross domestic product, with few of the predicted adverse consequences. Building expertly on large and complex literatures in history, economics and political science, In Defense of Public Debt offers a balanced account of the positive and negative aspects of public debt, showing the vitally
important role government borrowing can play in a time of crisis, but also the very real problems that can arise when debts grow too large. At a time when too many policymakers subscribe to naive ideas about public finance, this is a book that cries out for a readership beyond the academy.


Wendy Carlin, Professor of Economics, University College London For a typical citizen, protection in war-time or in a pandemic reveals their government to be a problem-solver rather than 'the problem.' Yet the legacy of such episodes in the accumulated national debt is widely misunderstood, opening the way to too rapid a turn to austerity. In Defense of Public Debt provides enlightenment and reassurance by inviting the reader to follow how public debtwarts and allhas helped create the modern world.


Raghuram Rajan, Professor of Finance, University of Chicago In Defense of Public Debt could not be timelier. It is an engaging and informative account of the use and misuse of government borrowing, from early times to the Covid pandemic. The unquestionable expertise of the authors, and their non-partisan re...

Barry Eichengreen is George C. Pardee and Helen N. Pardee Professor of Economics and Political Science at the University of California, Berkeley. He is the author of several earlier books published by Oxford University Press, including Golden Fetters, Exorbitant Privilege, Hall of Mirrors, and The Populist Temptation. Rui Esteves is Professor of International History at the Graduate Institute, Geneva. He specializes in monetary and financial history, straddling the fields of international finance, institutional economics, and public finance. His research provides perspective on the globalization of finance, financial crises, sovereign debt, financial market architecture, the choice of exchange rate regimes and emigrant remittances, as well as rent-seeking and corruption in public office. Asmaa El-Ganainy is Deputy Division Chief at the International Monetary Fund's Institute for Capacity Development (European and Middle Eastern Division). Previously, she contributed to the IMF's surveillance, lending, research, and capacity development work at the European and Fiscal Affairs Departments. Her experience has covered wide range of countries, including advanced, emerging and low-income countries. She has also contributed to the IMF's work on several crisis cases, including Greece at the height of the 2010 European sovereign debt crisis. She has published in the fields of sovereign debt, public finance, capital flows, and labor markets. Kris James Mitchener is Robert and Susan Finocchio Professor of Economics at Santa Clara University. His research focuses on financial crises, economic growth, exchange-rate regime choice, and monetary economics, and has appeared in the leading scientific journals, including the American Economic Review, the Journal of Political Economy, and Economic Journal. He served as editor-in-chief of Explorations in Economic History from 2015 to 2020.