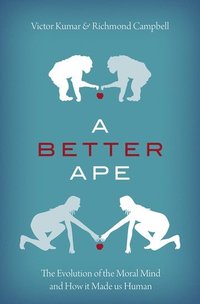 av Victor Kumar
Inbunden Engelska, 2022-07-11
258
Köp
Spara som favorit
Finns även som
Visa alla 2 format & utgåvor
In A Better Ape, Victor Kumar and Richmond Campbell reveal the essential role that morality played in the evolution of human beings. They are the first to argue that morality evolved alongside the other building blocks of human evolution: complex sociality and intelligence. For a long time, human cooperation was stable only because of morality, which limited violence and domination. And so, unless humans had deep-seated dispositions to care about one
another, follow moral rules, and exchange moral reasons, our complex sociality would have collapsed, and along with it, the selection pressures in favor of intelligence. So, the authors argue in this pioneering work, it is morality that helps explain not just the evolution of human cooperation, but the very
existence of humans as self-aware beings who can grasp their ultimate origins.
Visa hela texten

Allen Buchanan, Laureate Professor of Philosophy, The University of Arizona A Better Ape will transform evolutionary approaches to human morality and to human cultural evolution. With elegant, often stirring prose, and rigorous, scientifically-informed arguments, Kumar and Campbell not only illuminate the origins of human morality but also show how morality has driven human evolution.


Kristin Andrews, Professor of Philosophy and Research Chair in Animal Minds, York University Kumar and Campbell weave a tale of the past, present, and future of moral psychology by unifying some of the most compelling theories from philosophy, biology, psychology, comparative cognition, and anthropology. The story is masterfully told, and reading the book is like reading the end of a Sherlock Holmes story, when we learn how all the clues fit together. But this book isn't just for people who already have the pieces of the puzzle. Kumar and Campbell offer
clear and concise descriptions of leading theories in human evolution and moral psychology, giving just enough background to allow anyone to come along for the ride. Their argument that Darwinism richly explains morality is an important contribution to the ongoing debates.


Shaun Nichols, Professor of Philosophy and Director of Cognitive Science, Cornell University In this beautifully written book, Kumar and Campbell argue that evolution explains the emergence of morality, and, more strikingly, that human morality has subsequently played a key role in shaping our biological nature. A Better Ape manages that rare feat of making an important, novel contribution while also being a joy to read


Joseph Heath, Professor of Philosophy, University of Toronto Written in a clear, accessible style, this book presents a compelling synthesis of the best ideas in contemporary evolutionary theory and moral philosophy. A brilliant example of how philosophical reflection on topics of perennial concern can be enriched through deep engagement with the human sciences.