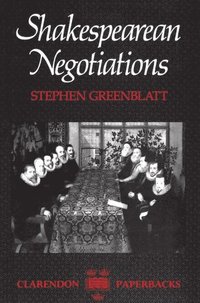 The Circulation of Social Energy in Renaissance England

av Stephen Greenblatt
Häftad Engelska, 1990-04-01
569
Köp
Spara som favorit
Kan tyvärr inte längre levereras innan julafton.
Stephen Greenblatt has been at the centre of a major shift in literary interpretation towards a critical method that places cultural creation in history. In this book - a sustained and powerful exemplification of this innovative method - he asks how collective beliefs and experiences are shaped, moved from one medium to another, concentrated in manageable form, and offered to the public on the stage. As well as giving us a new way of understanding Shakespeare's
achievement, the book is an original analysis of a cultural process.

Shakespearean Negotiations provides significant insights into Henry IV and Henry V, Twelfth Night, King Lear, and The Tempest; it also includes fascinating analyses of such aspects of early modern culture as exorcism, cross-dressing, colonial propaganda, and martial law codes. It is, as well, a masterly example of a new critical method by its leading practitioner.
Visa hela texten

`the most powerful and persuasive vision of the place of literature in Renaissance society in this generation ... a stunning volume, in which he moves beyond his earlier work to consider its assumptions and reassess the implications of its argument, and to provide thereby a poetics of Renaissance culture. The book is strong, supple, wide-ranging, and incredibly learned; to watch Greenblatt's mind in action in it is one of the greatest pleasures contemporary
scholarship affords us.'
Stephen Orgel

`Greenblatt compels one to think afresh about the strange position of a theater existing on the margin of an authoritarian society, and indeed about the whole question of the social and political contexts of works of art.'
Frank Kermode, New Republic

`so sharp on cultural stereotypes and on the abuse of power, should be read by all students of history and literature, by all thinking men and women'
New York Review of Books

'he dazzlingly exploits unexpected parallels and exchanges between Elizabethan medical theory andHenry IV ...a fascinating and provocative book. It deserves to be read.'
Country Life

'The cumulative effect of reading these four essays is one of exhilaration. The precise, enriching scholarship of our best historians of the people ... has been brought across in Greenblatt's writing into Shakespeare Studies.'
Martin Elliott, The English Association

'this is a fascinating and provocative book ... It deserves to be read.'
Paul Hartle, Country Life

'the movingly personal introduction conveys a love of Shakespeare that implies an untheoretical closeness to a man as well as a text ... Greenblatt is, of course, a wonderfully skilled story teller.
Dorothy Porter, University of Glasgow. Theatre Research International

'As a book of critical insights into some of Shakespeare's plays ... it abounds with stimulating comment and is written in Greenblatt's fluent and engaging prose style'
Thomas Healy, Birkbeck College, London, Renaissance Studies

'intricate and densely argued book ... its patient and scholarly uncovering of the complexities, and the contradictions, of the operations of power contributes excitingly to the study of Shakespearian texts'
John Drakakis, University of Stirling, Notes and Queries

`If his self-explanatory model is (for all its suppleness) continually defeated by the richness of the literary material, then the very defeat is vivid to us because of the honest intelligence and sensitivity of Greenblatt himself. This is remarkable writing; we need more of the same.'
Comparative Criticism