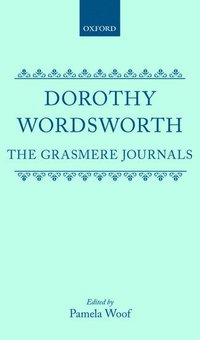 av Dorothy Wordsworth
Inbunden Engelska, 1991-05-01
209
Köp
Spara som favorit
This is a new edition of one of the best-loved of all journals. Dorothy Wordsworth's record of the walks and weather in Grasmere, and friends and neighbours was written between 1800 and 1803. There are many stories: of Wordsworth's marriage, of their concern for Coleridge, of the composition of poetry. Here the editor has returned to the original manuscripts and has produced new readings of mis-read or undeciphered words. We are brought closer to Dorothy Wordsworth
as a writer as her first thoughts, her crossings-out, and her afterthougts are revealed, in this fresh reading of a marvellous personal record.
Visa hela texten

`This will surely stand as the definitive text ... Her thorough and meticulous editing is crowned be extensive explanatory notes.'
The Keswick Reminder

'Woof's textual, historical, and biographical notes are unprecendented in detail and comprehensiveness and will thus make a useful addition to libraries supporting advanced studies in the English romantic period.'
N. Fruman, University of Minnesota, Choice, Apr '92

'it is, indeed, for the Notes, which do function as a running commentary on Dorothy Wordsworth's record, that we should be most grateful ... She has solved a few problems which baffled earlier editors ... Pamela Woof's edition should remain the standard one; it certainly brings with it the necessary sense of the impromptu, of what, in her Introduction she describes as the way 'the eye darts from fragment to fragment'. Her account of the effect of the writing is,
as in this phrase, perceptive. The edition is a handsome one and encourages careful reading.'
Douglas Hewitt, Pembroke College, Oxford, Notes and Queries, Vol. 39, No. 3, Sept '92

'This has to be considered the standard edition of Dorothy Wordsworth's Grasmere journals.'
Peter Morgan, University of Toronto, English Studies, Volume 73, Number 6, December 1992