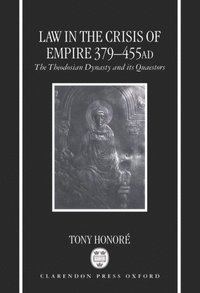 The Theodosian Dynasty and its Quaestors

av Tony Honor
Inbunden Engelska, 1998-05-01
1079
Köp
Spara som favorit
This is a new book from an eminent and well-respected scholar. A work of reference; an essay in the analysis of style; a contribution to the prosopography of the late Roman quaestorship; a reflection on the fall of the western and the survival of the eastern Roman empire: the book combines all four. Using his innovative method of analysis, already successfully employed in his highly-acclaimed Emperors and Lawyers (2nd edn 1994, OUP), the author examines
the laws of a crucial period of the late Roman empire (379-455 AD), a time when the West collapsed while the East survived. He allots the laws to their likely drafters and shows why the eastern Theodosian Code (429-438 AD), intended to restore the legal and administrative unity of the Roman empire, came too
late to save the West. The accompanying Palingenesia on an accompanying disk will enable scholars to read the texts chronologically and to judge the soundness of the arguments advanced.
Visa hela texten

R. W. Benet Salway, The Classical Review. the culmination of over a decade's work.

C.Wade Meade, American Hist.Rev.June 2000. His contribution to the prosopography is of top quality. As an essay on the analysis of style of the quaestors who drafted the laws, Honores work is outstanding. The palingenesia (found on two disks in the back) listing all the laws of the Theodosian age certainly makes this a work of reference ... This allows scholars to study each individual law in minute detail.

C.Wade Meade, American Hist.Rev.June 2000. The research conducted for this work is of the highest quality ... The style of the author is very readable.

C.Wade Meade, American Hist.Rev.June 2000. Not only should copies be found on the bookshevles of prosopographers and legal experts, but it is useful and valuable for any scholar interested in the late Roman or early Byzantine Empire.

Although this erudite book appeals to specialists, it also contributes significantly to the understanding of late Roman society./ K. W. Harl, Tulane University, Choice, May 1999, Vol 36, no 9