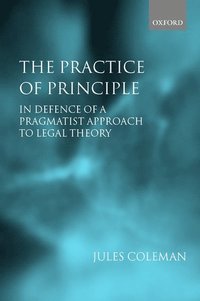 The Practice of Principle

In Defence of a Pragmatist Approach to Legal Theory

av Jules Coleman
Inbunden Engelska, 2001-04-01
999
Köp
Spara som favorit
Finns även som
Visa alla 1 format & utgåvor
Jules Coleman, one of the world's most influential philosophers of law here expounds his recent views on a range of important issues in legal theory. Coleman offers for the first time an explicit account of the pragmatist method that has long informed his work, and takes on the views of highly respected contemporaries such as Ronald Dworkin and Joseph Raz.
Visa hela texten

Michigan Law Review The Practice of Principle is exceptional for the fresh air it breathes into old debates, blowing aside the dust of tangential debates and leaving clean a work area in which beautiful philosophy proceeds.


Michigan Law Review For those with a serious interest in the field of legal philosophy, this is a must-read.


Michigan Law Review Practice is dense and rich, with new arguments appearing on almost every page.


Michigan Law Review Practice will surely be mined for years for its many and subtle discussions of the nature of law and legal argument. The book is a wonderful achievement, both for Coleman himself, and for the development of rigorous philosophical study of the law.


Michigan Law Review Jules Coleman's The Practice of Principle serves as a focal point for current, newly intensified debates in legal theory, and provides some of the deepest, most sustained reflections on methodology that legal theory has seen.


The Cambridge Law Journal ... ample food for thought on the part of anyone interested in legal philosophy. Coleman has enabled his readers to deepen their contemplation of the issues which he addresses.


The Cambridge Law Journal Though some of his critical observations on law-and-economics are not novel, they are tellingly and perceptively articulated. Furthermore, his methodological ruminations on his own account of tort law are illuminating.


Christopher Kutz, Times Literary Supplement Coleman's writing clearly basks in the heat of the seminar room. The result is to convey a mood of real intellectual excitement, even for readers with little stake in the outcome of particular debates. I suspect Jules Coleman's views will continue to evolve, pragmatically, as they confront the tribunal of experience and academic debate. In the mean time, we have this exceedingly valuable demonstration of the possibility and the limits of philosophical engagement.


Christopher Kutz, Times Literary Supplement The virtues of Colemans pragmatic approach ... are the generosity of its scope and the modesty of its objectives.


Christopher Kutz, Times Literary Supplement Coleman is probably the leading philosphical interpreter of private law in the Anglo-American world, particularly the law of torts ... The Practice of Principle burnishes his reputation in this field.

Jules Coleman is Wesley Newcomb Hohfeld Professor of Jurisprudence and Philosophy, Yale University. He is the editor of the journal Legal Theory.