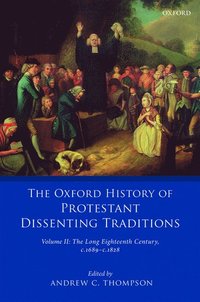 Nathalie Coll, XVII-XVIII Each of the 20 chapters is accompanied by extensive footnotes and followed by a very helpful Select Bibliography. It was carefully edited and aptly illustrated in some places


Robert Pope, Journal of the United Reformed Church History Society this is an honest and fair account of Protestant Dissent which enables some myths to be dispelled ... The dissenters' history is worth recounting. It is well-served in this book.


Julie L. Holcomb, Reading Religion The Oxford History of Protestant Dissenting Traditions, Volume II: The Long Eighteenth Century provides a broad and important overview of the impact of the Toleration Act on Dissenting Protestants in the long 18th century. By focusing on both the specifics of Dissent and the wider context for religious change, Thompson and the contributors have successfully placed the history of Dissent within the broader history of the British Empire and the Atlantic world.


G. H. Shriver, CHOICE Valuable essays deal with these many new traditions and their theology, sermons, hymnody, and dissenting education. In addition, print culture and material culture are explored in depth. Thompson is to be commended for bringing together some of the very best church history scholars in the world. Thorough notes and full bibliographies enhance the volume. Readers can look forward to the final three volumes in this set ... Highly recommended.


William Gibson, Journal of British Studies the collection as a whole is a major achievement and an outstanding contribution to the literature on Dissent in the eighteenth century. It has been superbly edited and represents an important scholarly moment. The volume will be necessary reading for students of religion in the eighteenth century for which the editor and contributors are to be congratulated.

Andrew C. Thompson is an Official Fellow and Senior College Lecturer in History at Queens' College, Cambridge. His publications include Britain, Hanover, and the Protestant Interest (2006) and George II: King and Elector (2011) as well as a number of articles on eighteenth-century religion, politics, and diplomacy.