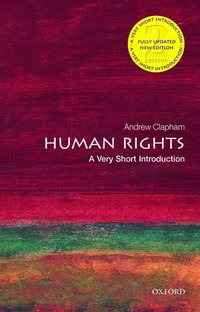 av Andrew Clapham
Häftad Engelska, 2015-11-26
97
Köp
Spara som favorit
What are our human rights? What are their philosophical justifications and historical origins? Focusing on highly topical issues such as torture, arbitrary detention, privacy, and discrimination, this Very Short Introduction discusses the controversies and complexities behind these vitally relevant issues.
Visa hela texten

Phillip Taylor MBE and Elizabeth Taylor of Richmond Green Chambers A highly suitable starting point for students of law, moral and ethical philosophy, history and politics. And, of course, activists in civil society movements or those who seek an accessible introduction to human rights and their relevance to current events.


Phillip Taylor MBE and Elizabeth Taylor of Richmond Green Chambers This short book covers one main area of current interest very well: how the human rights movement has gained increasing attention internationally... "Clapham on Human Rights" can be summed up as one of the best titles we have read yet from OUP.