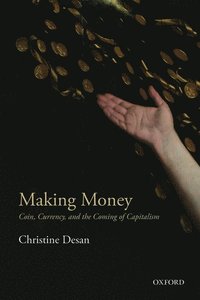 Coin, Currency, and the Coming of Capitalism

av Christine Desan
Inbunden Engelska, 2014-11-27
901
Köp
Spara som favorit
Finns även som
Visa alla 3 format & utgåvor
In this revisionist history of the development of the modern monetary system, Desan argues that money effectively creates economic activity rather than emerging from it. Her account demonstrates that money's design has been a project central to governance and formative to markets.
Visa hela texten

Paolo di Martino, The Economic History Review This fascinating book offers an innovative approach to monetary history, by using the historical development of currency in England from the high middle ages to the nineteenth century to challenge the established theory of money and its role in the economy This book is an excellent contribution to the existing literature [and] must also be considered an important contribution to fields such as law, economics, political science, and the history of economic
ideas.


Carolyn Sissoko, Synthetic Assets A closing sentence of Desan's Making Money encapsulates what I find truly extraordinary about her book: Arguably capitalism... constructed a money [based on] individual exchange for profit, institutionalizing that motive as the heart of productivity" ... In my view Desan's greatest contribution in Making Money is a clear explanation of how monetary reform set the stage for modern economic performance.


Roy Kreitner, Banking and Finance Law Review This book is an obvious must for anyone interested in English history generally, and the history of money, banking or finance, or the legal history of these fields in particular. That much goes without saying. For historians of capitalism, it should be a lightning rod, attracting attention with a bold, unorthodox and analytically and historically compelling claim.


Bruce G. Carruthers, American Historical Review Making Money is an impressive work of scholarship that not only surveys many centuries of history, but also offers fresh insights into a topic so laden with assumptions and parables as to seem barely worth reexamination. The book is part legal analysis, part political and economic history, and part numismatics, and it is more representative of an interpretive essay than an encyclopedia of monetary history.


Andrew David Edwards, Law and Social Inquiry Christine Desans Making Money: Coin, Currency, and the Coming of Capitalism. . . expands the limited theoretical interventions of myriad governance-view theorists into positive, empirical claims by telling the story of British money through law from the fall of Rome to the eighteenth-century financial revolution, and in so doing expands on them significantly. . . What Desan has given us, and earlier authors have not, is a thorough alternative, grounded in
legal history, that, helpfully, includes an origin story for the orthodox account of moneys origins. Although some may continue to defend the orthodox conjectural history of money. . . they will be hard-pressed to do so on empirical grounds in light of Desans account.


Simon Middleton, The Medieval Review Desan's singular achievement has been to not only synthesize a vast literature but to also produce a richly detailed, compelling, and original account of how the development of market commerce and capitalism was largely dependent upon the transformation of the ways in which people thought about and made their money. Needle...

Christine Desan, Leo Gottlieb Professor of Law, Harvard Law School Christine A. Desan is the Leo Gottlieb Professor of Law at Harvard Law School. She teaches about the international monetary system, the constitutional law of money, constitutional history, political economy, and legal theory. She is the co-founder of Harvard's Program on the Study of Capitalism; with its co-director, Professor Sven Beckert (History), she has taught the Program's anchoring research seminar, the Workshop on the Political Economy of Modern Capitalism, since 2005. Desan's research explores money as a legal and political project, one that configures the market it sets out to measure.

Introduction ; 1. Creation Stories ; 2. From Metal to Money: Producing the "Just Penny" ; 3. Commodity Money as an Extreme Sport: Flows, Famines, Debasements, and Imitation Pennies ; 4. The High Politics of Money: Strong Coin, Heavy Taxes, and the English Invention of Public Credit ; 5. The Social Stratigraphy of Coin and Credit in Late Medieval England ; 6. Priming the Pump: The Sovereign Path Towards Paying for Coin and Circulating Credit ; 7. Interests, Rights, and the Currency of Public Debt ; 8. Reinventing Money: The Beginning of Bank Currency ; 9. Re-theorizing Money: The Struggle over Money in the Modern Imagination ; 10. Making Modern Money: Producing the Private as a Matter of Public Design ; 11. Conclusion: From Blood to Water ; Bibliography