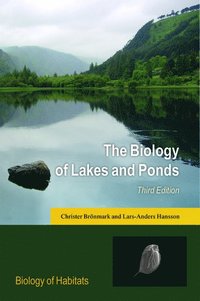 The Biology of Lakes and Ponds

Limnology and Oceanography Bulletin It does an excellent job at introducing a remarkably wide array of limnological concepts for such a small book. It is very readable and its style will inspire many undergraduate students.

Bloggat om The Biology of Lakes and Ponds

Christer Bronmark completed his undergraduate studies as well as his Ph.D. thesis at Lund University. After defending his Ph.D. in 1985 he did a post doc at Ohio State University, Columbus and then returned to Lund University where he now has a position as Professor of Aquatic Ecology. His research interest deals with the predation in freshwater systems at different organisational levels, from effects on individual behaviour and inducible defence adaptations to indirect interactions in food webs at the community level. At present he is working with the causes and consequences of partial migration in freshwater fish and proximate mechanisms behind the expression of inducible defences. He regularly teaches courses on population and community ecology, aquatic ecology, and limnology. Lars-Anders Hansson's Ph.D. thesis dealt with competitive interactions among primary producers and was defended in 1989. Thereafter he spent some years as a post-doc focussing on aquatic food web interactions and on habitat shifts by algae and zooplankton from sediment to water. Most of his studies have been carried out in Europe, but he has also worked in the USA, as well as in polar regions, such as Siberia, Alaska, Canada, and Antarctica. Specifically he has studied how zooplankton utilize their morphological and behavioural plasticity to handle simultaneous multiple threats and has used nanotechnology to track the behaviour of individual animals. Although his main interest has been within curiosity driven, research, he also has an interest in more applied issues, such as the possibility of restoring aquatic ecosystems, how to handle effects from climate change, and how novel environmental threats, such as the immense use of nanosized particles, may affect aquatic ecosystems.

1: Introduction 2: The abiotic frame and adaptations to cope with abiotic constraints 3: The organisms: the actors within the abiotic frame 4: Biotics: competition, herbivory, predation, parasitism, and symbiosis 5: Food web interactions in freshwater ecosystems 6: Biodiversity and environmental threats