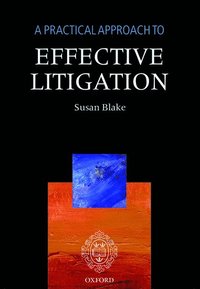 A Practical Approach to Effective Litigation

av Susan Blake
Häftad Engelska, 2015-03-05
1329
Köp
Spara som favorit
Finns även som
Visa alla 2 format & utgåvor
This assessment of the key skills needed to handle a case bridges the Civil Procedure Rules and the reality of case management, explaining the rationale of civil litigation. An overview of the litigation process advises on complying with procedure, using evidence, and how to ensure you are taking account of the rules on funding and costs.
Visa hela texten

Susan Blake, Associate Dean of The City Law School, City University London. Susan Blake spent several years in practice at the Bar dealing with a variety of types of case in all levels of courts. She was formerly Course Director of the Bar Vocational Course at the Inns of Court School of Law, having played a major part in devising and implementing the BVC. She became Director of Studies in 1998, and is now also Programme Director for the LLM in Civil Litigation and Dispute Resolution that was introduced in 2011. This Master's course fits quite closely with the coverage of this book, as it focuses on effective legal practice, and current issues in legal practice. Susan is also a co-author of <"A Practical Approach to Alternative Dispute Resolution (3rd edition 2014), and of <"The Jackson ADR Handbook>" (2013) which was published in connection with the implementation of proposals resulting from The Jackson review of Costs. Both books are published by Oxford University Press.