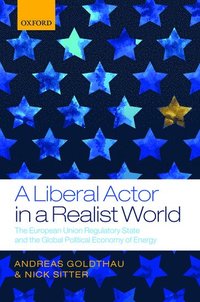 A Liberal Actor in a Realist World

Francesca Batzella, Global Policy Journal the study contributes widely to a literature which so far has not been particularly abundant ... also offers rich empirical evidence about what IPE actually entails in the EU and what the specific challenges are and which tools are involved. Finally, having established that the EU is a liberal regulatory state, the book asks several questions about EU actorness in the IPE of energy such as, for example, how the heterogeneity of preferences among Member states might
impact on EU actorness externally. The monograph, therefore, not only contributes to the existing theoretical and empirical debate but also nourishes this debate with additional points for future research.


Francesca Batzella, Global Policy Reviews [T]he book has several theoretical and empirical contributions to offer. Conceptualizing the EU as a liberal regulatory state, the study contributes widely to a literature which so far has not been particularly abundant.

Dr. Nick Sitter is Professor of Public Policy at the Department of Public Policy at Central European University, Professor of Political Economy at the BI Norwegian Business School, Research Associate at the Centre for Analysis of Risk and Regulation at the London School of Economics and Political Science. His books and edited volumes include Europe's Nascent State: Public Policy in the EU (Gyledendal Akademiske, 2006), Understanding Public Management (Sage, 2008), a special issue of Nations and Nationalism on constitutions (2010), and Terrorismens Historie (Dreyer, forthcoming).