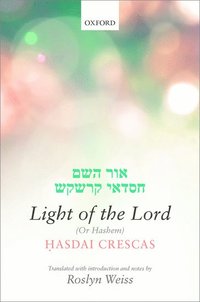 Crescas: Light of the Lord (Or Hashem)

Translated with introduction and notes

Daniel Frank, Journal of the History of Philosophy Apart from partial translations by Warren Harvey and Harry Wolfson, the English-speaking student of (late) medieval Jewish philosophy has had limited access to the text. Thanks to Roslyn Weiss's felicitous new translation, this is no longer the case.

Roslyn Weiss is the Clara H. Stewardson Professor of Philosophy at Lehigh University in Bethlehem, PA. She holds a doctorate in philosophy from Columbia University and an MA in Jewish Studies from the Baltimore Hebrew University. She has published four books on Plato and 50 scholarly articles on mainly Greek and Jewish philosophy.