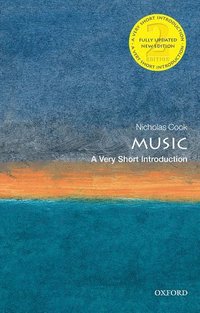 av Nicholas Cook
Häftad Engelska, 2021-02-25
117
Köp
Spara som favorit
Finns även som
Visa alla 2 format & utgåvor
Nicholas Cook explores the nature of music, how we think about it, its social and cultural dimensions, and its history. He discusses the many musical traditions across the world and the interactions between them. He also considers performance, how composers create music, and the position of music in today's globalized society.
Visa hela texten

Nicholas Cook is Emeritus Professor of Music at the University of Cambridge. He has published widely across many fields of music studies; his book The Schenker Project: Culture, Race, and Music Theory in Fin-de-siecle Vienna (2007) won the SMT's Wallace Berry Award, while his most recent book is Music as Creative Practice (2018). Director of the AHRC Research Centre for the History and Analysis of Music (CHARM) from 2004-9, he was elected Fellow of the British Academy in 2001 and holds a Doctorate of Humane Letters from the University of Chicago.

Acknowledgements Introduction 1: Music in the moment 2: Thinking in music 3: The presence of the past 4: Music 2.0 5: Music in a global world References Further Reading Index