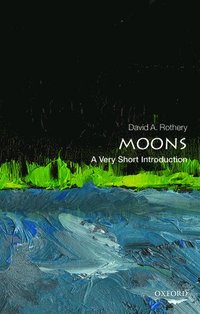 Astronomy Now an excellent introduction to Moons in a genuinely pocket-sized book that won't break the bank.


Geoscientist This small, densely packed paperback is a fantastic starting point for those interested in learning more about the 190 or so moons found within our solar system. Not merely a book of tables and facts about these celestial bodies, Moons covers the rich history of exploration and discovery along with the ideas that were shaped and moulded by astronomers across the ages.

David Rothery is Professor of Planetary Geosciences at the Open University. During 1999-2004 he was Director of Teaching and Geosciences Programme Director in the former Department of Earth Sciences. He has also been Leader of the IAVCEI Commission on Remote Sensing, and in 2005 he was appointed to the PPARC Solar System Advisory Panel and the BepiColombo Oversight Committee. He is the lead academic (production) and Educator (presentation) for the Open University/FutureLearn Moons MOOC, and is the author of several books, including Satellites of the Outer Planets - worlds in their own right, and Planets VSI.

1. The discovery and significance of moons ; 2. The Moon ; 3. The Moon's influence on us ; 4. The moons of giant planets ; 5. Giant planet regular satellites in close up ; 6. The moons of Mars - captured asteroids ; 7. Moons of small bodies ; 8. Moons in other planetary systems: exomoons ; Further Reading ; Index