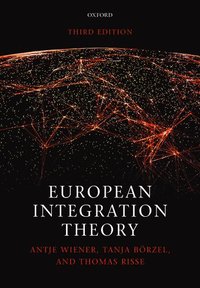 av Antje Wiener
Häftad Engelska, 2018-12-19
409
Köp
Spara som favorit
Skickas inom 5-8 vardagar.
Fri frakt inom Sverige för privatpersoner.
With coverage of both traditional and critical theories and approaches to European integration and their application, this is the most comprehensive textbook on European integration theory and an essential guide for all students and scholars interested in the subject.
Visa hela texten

Uwe Puetter, Central European University By drawing and redrawing the mosaic of integration theory the book has, for more than a decade, coined a particular way of reflecting on the state of the art in EU studies. A major reference reading.


Frdric Mrand, Universit de Montral Bringing together the most influential European integration theorists of the day, this volume is a bit like the EU studies' Hall of Fame. Each chapter offers a sharp focus on theoretical controversies about evolving empirical puzzles. A useful companion for both seasoned and aspiring Europeanists.


Professor Amy Verdun, University of Victoria, Canada Review from previous edition A must-read for anyone with an interest in European integration and European Politics


Professor Liesbet Hooghe, University of North Carolina In a packed field of textbooks on theories of European integration, European Integration Theory - now in its third edition and with a new editorial team - is a breath of fresh air. Its unique contribution is that it gives pride of place to lesser traveled perspectives, including gender, discourse analysis, critical political economy, normative political theory, and comparative regionalism, alongside mainstream approaches. Comprehensively revised, updated,
and presented in a student friendly format, this is an invaluable guide to understanding European integration in the 21st century.