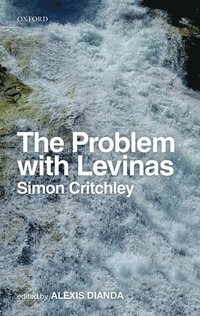 The Problem with Levinas


Mary Shanahan, History of Political Thought The Problem with Levinas is simply put, an excellent book. It is an enjoyable, dramatic and insightful read which far exceeds the expectations one might usually have of a published set of lectures. There is a clear train of thought throughout which is expressed with clarity and a dash of literary flair.

Bloggat om The Problem with Levinas

Simon Critchley is Hans Jonas Professor at the New School for Social Research. His books include Very Little ... Almost Nothing, Infinitely Demanding, The Book of Dead Philosophers, The Faith of the Faithless, The Mattering of Matter, Documents from the Archive of the International Necronautical Society (with Tom McCarthy), and Stay, Illusion! The Hamlet Doctrine (with Jamieson Webter). An experimental new work, Memory Theatre, and a book called Bowie were published in September 2014. He is moderator of 'The Stone', a philosophy column in The New York Times, to which he is a frequent contributor.

Preface ; Abbreviations of Levinas' Works ; LECTURE ONE ; Hegel or Levinas? - Philosophy and Sexual Difference - Why Philosophy? The Problem of Method - Against Aristotle: The Meaning of Drama - Moral Ambiguity - The Seduction of Facticity - At War with Oneself - Heidegger's Comedy Turns Tragic - The Theology of Clothes - Beyond the Tragedy of Finitude - A Happy Ending ; LECTURE TWO ; Hitlerism Against Liberalism - Elemental Evil - The Marxist Critique of Liberalism and a Critique of Marxism - Embodiment and Racism - Why Europe is So Great - The Bio-Politics of Fascism - French Philosophy is Not Pornography - Escape: The Ur-Form of Levinas' Thought - Being Riveted and the Need for Excendence - Desire and Malaise - Pleasure and Shame - I Love Phaedra - The Impotence of Being - Is There a Way Out of Barbarism? - Levinas in Captivity ; LECTURE THREE ; The Break-up of Fate - How to Build an Immonument - Ethics Back to Front - Levinas' Anarchism - Waving Goodbye to the Principle of Non-Contradiction - The Weak Syntax of Skepticism - Escaping Evasion Through That Which Cannot Be Evaded - The Structure of Otherwise than Being - In Itself One: This is Not a Metaphor - Four Problems: Prescription, Agency, Masochism, Sublimation - Love Song ; LECTURE FOUR ; Levinas' Marvelous Family - The Problem of Eros - Into the Abyss, the Inexistent - Why You Should All Have Children - Pluralism, the Break with the One - The Denouement of Levinas' Comedy - Forgiveness, Reconciliation, Messianism: The End of Totality and Infinity - Occupy Philosophy! Irigaray's Strategy - Shakespeare's Misogyny - The Song of Songs, Finally - Against Scholem, For Hysterical Extravagance - Mysticism in the Kitchen - All Mouth - Decreation, Annihilation - The Enjoyment of God - Sovereign Love ; Afterword ; Bibliography