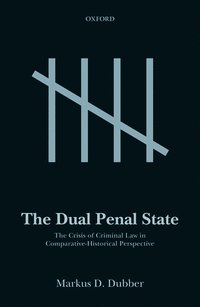 The Crisis of Criminal Law in Comparative-Historical Perspective

James Monaghan, Sydney Law Review Though the argument is dense at times, its methodological focus makes it compelling reading even for those unfamiliar with penality in Germany and the US. And the fruitfulness of his comparative-historical study commends the critical tools that he employs.


Kimmo Nuotio, Bergen Journal of Criminal Law and Criminal Justice The book is a good read not only for legal comparatists or legal historians, but also for the criminal law scholars themselves.


Jonathan Simon, Adrian A. Kragen Professor of Law, Berkeley Law Markus Dubber's unparalleled comparative and historical scholarship on criminal law takes readers to the heart of the fundamental tension between the project of building liberal democratic societies and the state's power to punish. The Dual Penal State is essential reading for anyone grappling with how to move forward from the manifest disaster of excessive punishment and mass incarceration in the United States and its imitators around the globe.


Lindsay Farmer, Professor of Law, University of Glasgow This book is an important summary and development of Dubber's ongoing interrogation of the relationship between police and law. The primary focus of the book is the crisis of liberal penality, which he sees in the prima facie illegality of state penal violence and the continuing failure of liberal criminal law theory adequately to address this. Over the course of his exploration of the development of US and German criminal law, he develops a powerful and
wide-ranging, critique of the evasions and diversions of contemporary criminal law theory - and how these evasions contribute to the lack of scrutiny of penal power.


Tatjana Hrnle, Professor of Criminal Law, Comparative Criminal Law, and Penal Philosophy, Humboldt University, Berlin Markus Dubber illuminates paradoxes of state power and challenges for the project of liberal criminal law. The book must attract the attention of a wide readership across legal systems and legal traditions. The concept of a dual penal state proves a useful instrument to shed a critical light on historical developments in criminal law and criminal law science, both in Germany and the United States.

Markus Dubber is Professor of Law and Director of the Centre for Ethics at the University of Toronto. Much of Markus's scholarship has focused on theoretical, comparative, and historical aspects of criminal law. He has published, as author or editor, eighteen books as well as over seventy papers; his work has appeared in English and German, and has been translated into Arabic, Chinese, Italian, Korean, Persian, and Spanish. His publications include Criminal Law: A Comparative Approach (with Tatjana Hoernle) (2014); The Oxford Handbook of Criminal Law (with Tatjana Hoernle) (2014); Foundational Texts in Modern Criminal Law (2014); The New Police Science: The Police Power in Domestic and International Governance (with Mariana Valverde) (2006); The Police Power: Patriarchy and the Foundations of American Government (2005); and Victims in the War on Crime (2002).

Introduction: The Crisis of the Modern Penal State PART I CRIMINAL LAW SCIENCE AND ITS DIVERSIONS 1: Engaging Scholarship: Criminal Law and the Legitimation of Penal Power 2: The Rhetoric of Criminal Law: Sloganism and Other Coping Mechanisms PART II THE DUAL PENAL STATE: TOWARD A CRITICAL ANALYSIS OF CRIMINAL LAW 3: Law and Police as Modes of Governance 4: Penal Law and Penal Police in the Dual Penal State PART III AMERICAN PENALITY BETWEEN LAW AND POLICE: A CRITICAL GENEALOGY 5: America's Internal Penal Exceptionalism 6: Thomas Jefferson's Virginia Criminal Law Bill 7: The Model Penal Code and the War on Crime