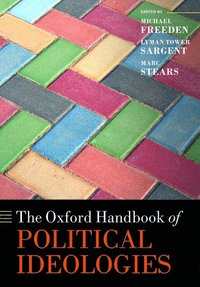 The Oxford Handbook of Political Ideologies

av Michael Freeden
Häftad Engelska, 2015-08-27
419
Köp
Spara som favorit
Kan levereras innan julafton!
Finns även som
Visa alla 3 format & utgåvor
This Oxford Handbook will be the definitive study of political ideologies for years to come. The diversity of ideology studies is represented by a mixture of the range of theories that illuminate the field, combined with an appreciation of the changing complexity of concrete ideologies and the emergence of new ones.
Visa hela texten

Paul Dragos Aligica, International Affairs This is a landmark volume: it synthesizes the work done so far and at the same time opens a new stage in the research of a key political phenomenon that has been, the editors correctly note, under-appreciated and under-researched.

Marc Stears is Professor of Political Theory at the University of Oxford and Fellow of University College, Oxford. He is the author of Demanding Democracy: American Radicals in Search of a New Politics (Princeton, 2010) and Progressives, Pluralists and the Problems of the State (Oxford, 2002), as well as the joint editor of Political Philosophy versus History? (Cambridge, 2012), Liberalism as Ideology (Oxford, 2012) and Political Theory: Methods and Approaches (Oxford, 2008). His own research concentrates on ideologies of democratic radicalism and social reform, especially in United States and Britain.