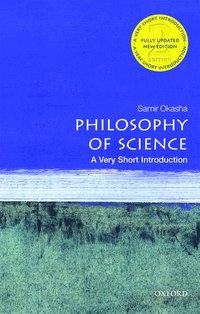 av Samir Okasha
Häftad Engelska, 2016-07-28
Studentlitteratur
119
Köp
Spara som favorit
Kan tyvärr inte längre levereras innan julafton.
This Very Short Introduction provides a concise overview of the main themes of contemporary philosophy of science. It explores the fundamental questions and challenges in the field, and looks at philosophical issues in particular sciences, including the problem of classification in biology, and the nature of space and time in physics.
Visa hela texten

Samuel Schindler, Metascience The 2nd Edition of Samir Okasha's Philosophy of Science: A Very Short Introduction is a fantastic entry point for all those who would like to get an overview of the issues philosophers of science grapple with. The book is written in a highly accessible and clear fashion, and manages to cover an impressively wide and I would say, representativerange of topics on a mere 130 pages. -


Jonathan Cowie, Concatenation Do not underestimate the value of having a working understanding the philosophy of science, to which end this short book is one that you - if your professional life has any connection with science - could well find invaluable

Samir Okasha is Professor of Philosophy of Science at the University of Bristol, where he has taught since 2003. He currently serves as Associate Editor of Philosophy of Science, and has previously served as Associate Editor for the European Journal for the Philosophy of Science. He is currently the holder of a European Research Council Advanced Investigator Award, for a research project entitled 'Darwinism and the Theory of Rational Choice'. His articles have appeared in multiple leading philosophy and science journal, and he has authored several books, including Evolution and the Levels of Selection (OUP, 2006) and Evolution and Rationality (CUP, 2014).

1: What is science? 2: Scientific Inference 3: Explanation in science 4: Realism and anti-realism 5: Scientific change and scientific revolutions 7: Science and its critics Further reading Index