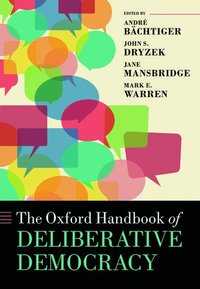 The Oxford Handbook of Deliberative Democracy

Andre Bachtiger holds the Chair of Political Theory at the Department of Social Sciences at the University of Stuttgart since 2015. His research focuses on the challenges of mapping and measuring deliberation and political communication as well as understanding the preconditions and outcomes of high-quality deliberation in the contexts of both representative institutions and mini-publics. His research has been published by Cambridge University Press and in the British Journal of Political Science, European Journal of Political Research, the Journal of Political Philosophy, the Journal of Conflict Resolution, European Political Science Review, Political Studies, and Acta Politica. John S. Dryzek is Australian Research Council Laureate Fellow and Centenary Professor in the Centre for Deliberative Democracy and Global Governance at the University of Canberra. He is a former head of the Departments of Political Science at the Universities of Oregon and Melbourne, and of the Social and Political Theory Program at Australian National University. He is co-editor of The Oxford Handbook of Political Theory and The Oxford Handbook of Climate Change and Society. His most recent OUP book is Climate-Challenged Society (with Richard Norgaard and David Schlosberg). Jane Mansbridge is Charles F. Adams Professor of Political Leadership and Democratic Values. She is the author of Beyond Adversary Democracy, an empirical and normative study of face-to-face democracy, and the award-winning Why We Lost the ERA. She is also editor or coeditor of the volumes Beyond Self-Interest, Feminism, Oppositional Consciousness, Deliberative Systems, and Negotiating Agreement in Politics. Her work has appeared in leading journals such as the American Political Science Review and the Journal of Politics. Her current work includes studies of representation, democratic deliberation, everyday activism, and the public understanding of free-rider problems. Mark E. Warren holds the Harold and Dorrie Merilees Chair for the Study of Democracy at the University of British Columbia. He is especially interested in democratic innovations, civil society and democratic governance, and political corruption. Warren is author of Democracy and Association (Princeton University Press, 2001), editor of Democracy and Trust (Cambridge University Press, 1999), and co-editor of Designing Deliberative Democracy: The British Columbia Citizens' Assembly (Cambridge University Press, 2008). Warren's work has appeared in journals such as the American Political Science Review, the American Journal of Political Science, and Political Theory. He is currently working with an international team on a project entitled Participedia (www.participedia.net ), which uses a web-based platform to collect data about democratic innovation and participatory governance around the world.