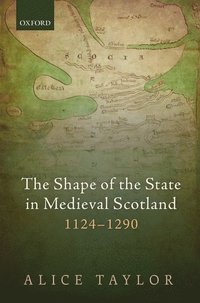 av Alice Taylor
Inbunden Engelska, 2016-03-03
1229
Köp
Spara som favorit
Skickas inom 10-15 vardagar.
Fri frakt inom Sverige för privatpersoner.
Finns även som
Visa alla 2 format & utgåvor
The first full-length study of Scottish royal government in the twelfth and thirteenth centuries, detailing how, when, and where the kings of Scotland started ruling through their own officials, developing their own system of courts, and fundamentally extending their power over their own people.
Visa hela texten

Paul R. Hyams, American Historical Review In the next generation, all arguments on Scottish governance (and much else) will start from this book.


Hector L. MacQueen, Edinburgh Law Review [Alice Taylor] is to be congratulated and thanked, not only for a remarkable contribution to our knowledge and understanding of medieval Scotland and its systems of government and law, but also for the stimulation which her work will undoubtedly provide.


J.S. Hamilton, Scotia: Interdisciplinary Journal of Scottish Studies [A]uthoritative new study....Through a close reading of the surviving source material that challenges several long-held assumptions, Taylor breaks new ground. This book is the culmination of more than a decade of detailed studies by Taylor. It is a challenging work, informed by profound scholarship and a keen sense of purpose. It is sure to lead to considerable discussion and inspire further work in this difficult area of study.


Richard Oram, Renaissance Quarterly Every generation or so a book is produced that is truly transformative of our understanding of the historical processes that led to evolutionary step changes in the development of a culture or polity. Such is the status of Alice Taylor's magisterial study of the formation of the medieval Scottish state. ... Through Alice Taylor's scholarship we have been presented with a new historiographical horizon; now we need to populate the new landscape with the detail of the
new world beyond it.


Victoria Hodgson, University of Stirling In this hugely significant and ambitious book, Alice Taylor offers a detailed survey of the developing form of royal government in Scotland during the twelfth and thirteenth centuries... Through rigorous and insightful analysis, Taylor has constructed a vital interpretive model for understanding the dynamics of royal power in Scotland during this period.


Judges' comments for the 2017 Whitfield Prize of the Royal Historical Society The Shape of the State in Medieval Scotland is a work of great scholarship and insight. Through its penetrating analysis of detailed evidence and complex sources, it builds a picture of the gradual development of the state in early Scotland, drawing upon fresh approaches and evidence to yield a textured and nuanced understanding of the growth of royal government in 12th and 13th-century Scotland ... Situating its analysis in a European perspective, it makes
an important contribution to the study of medieval kingship, statecraft and the aristocracy. This is a ground-breaking book which will set the terms of debate for many years to come.


Comparative Legal History This volume represents a truly remarkable scholarly achievement. Without doubt, it is the single most significant work to be published on the Scottish legal system during the central Middle Ages in over 20 years. And yet is does more. Its revolutionary conclusions convincingly explain how the laws of the realm were transformed by sh...

Bloggat om The Shape of the State in Medieval Scotla...

Alice Taylor is Lecturer in Medieval History at King's College London. She was born in London and studied History at St Peter's College, Oxford. After receiving her doctorate from Oxford in 2009, she was a Research Fellow at King's College, Cambridge until 2011. She has published widely on many aspects of medieval Scottish history in journals such as Historical Research, The Scottish Historical Review, and The Haskins Society Journal, and has received prizes for her work from the Institute of Historical Research and the Scottish History Society. This is her first book.