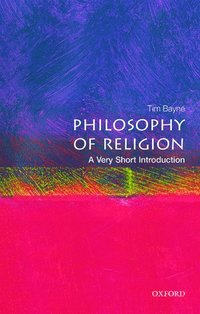 av Tim Bayne
Häftad Engelska, 2018-02-22
117
Köp
Spara som favorit
Philosophy of religion contains some of our most burning questions about the role of religion in the world, and the relationship between believers and God. Tim Bayne considers the core debates surrounding the concept of God; the relationship between faith and reason; and the problem of evil, before looking at reincarnation and the afterlife.
Visa hela texten

Kevin Folkman, The Association for Mormon Letters A lively but brief survey of the major elements of religious philosophy, laying out short but understandable paragraph-length explanations of various arguments, and then the competing counterarguments. [Bayne] wisely draws no conclusions, and instead creates a foundation for further exploration, which is ultimately the goal of the many different titles in the Very Short Introduction series.


Terry Eagleton, Distinguished Visiting Professor in English, University of Lancaster This lucid, rigorously argued book will gratify religious believers on one page only to unsettle them on the next, a sign of its admirable even-handedness.

1: What is the philosophy of religion? 2: The concept of God 3: Arguments for God's existence 4: Faith and silence 5: The problem of evil 6: The roots of religion 7: Speaking of God 8: The Afterlife Further Reading Index