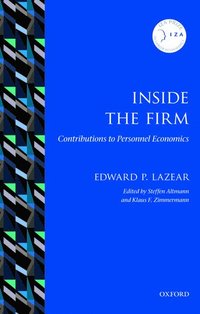 Professor Lazear taught previously at the University of Chicago's Graduate School of Business, where he was the Brown Professor of Urban and Labor Economics. Lazear served as Chairman of the President's Council of Economic Advisers and was at the White House from 2006 to 2009. Founding Editor of the Journal of Labor Economics, Lazear is a Fellow of the American Academy of Arts and Sciences and of the Econometric Society, and a Research Associate of the National Bureau of Economic Research. He is the former President of the Society of Labor Economists. Professor Lazear has written extensively on labor markets and personnel issues. He has over 100 published articles and eleven books. His book Personnel Economics (MIT Press, 1995) received the Melamed Prize in 1998. In June 2006, Lazear was awarded the Jacob Mincer Prize given by the Society of Labor Economics for lifetime contributions to the field.