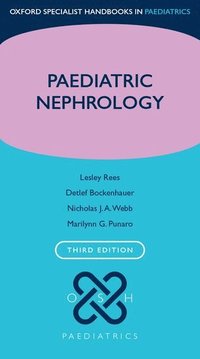 Prof Rees is a Consultant Paediatric Nephrologist at Gt Ormond St Hospital and Professor of Paediatric Nephrology at the Institute of Child Health, UCL. She has a longstanding clinical and research interest in growth, nutrition, bone and cardiovascular disease in CKD. In addition, she has received over GBP2m grant income, supervised 9 PhD/MD students and written approximately 150 peer reviewed publications and 30 book chapters. She is Co-Editor of the journal 'Pediatric Nephrology'. She was awarded the 'Lifelong Achievement Award' by the International Pediatric Nephrology Association in 2016. Prof Bockenhauer is Consultant Paediatric Nephrologist at Great Ormond Street Hospital for Children since 2004 and became a Professor in Paediatric Nephrology at UCL in 2015. He holds a special interest in inherited kidney diseases, most notably tubulopathies, and has co-discovered numerous renal disease genes, as well as a number of previously undescribed inherited disorders involving renal phenotypes. He has written more than 150 peer reviewed medical publications. Prof Bockenhauer leads the UK Rare Renal Disease Registry, and is on the board of the European Rare Kidney Disease network (ERKnet), where he leads the working group for tubulopathies. He is on the editorial board of several kidney-related journals. Prof Webb is Consultant Paediatric Nephrologist at the Royal Manchester Children's Hospital, and Honorary Professor in Paediatric Nephrology at the University of Manchester. He holds a subspecialty interest in childhood nephrotic syndrome, kidney transplantation and hypertension. His current personal NIHR research grant income is over GBP4m and he has written more than one hundred peer reviewed medical publications. His major area of research interest is in clinical trials of new medicinal products in children with renal disease. Professor Webb is Director of the NIHR Manchester Clinical Research Facility. Prof Punaro holds the Nadine and Tom Craddick Professorship in Medical Education, and is the Master of Fashena College, at University of Texas Southwestern. She is a founding member of the Childhood Arthritis and Rheumatology Research Alliance (CARRA), the largest collaborative clinical research network in paediatric rheumatology in North America. Her collaboration with translational research, particularly in paediatric lupus and in auto inflammatory diseases has led to high impact publications and therapeutic advances. In 2016, she was designated a Master of the American College of Rheumatology (ACR), a distinction awarded to members who have made an outstanding contribution to the field of rheumatology.