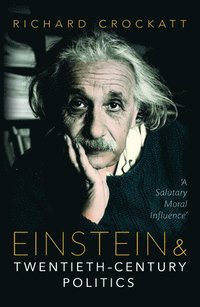 Andrew Robinson, The Daily Telegraph the first book to survey the range of Einstein's political activism historically, from his public opposition to Germany's role in the First World War until his death in 1955. In engaging, non-academic prose ... the book offers stimulating analysis of the effects of Einstein's words and actions


Adi Gordon, Journal of Modern History Crockatt's in-depth analysis of Einstein's different political causes, their contradictions and intersections, contributes greatly to a fuller understanding of not only Einstein as a public intellectual but also the twentieth-century political causes he engaged.


Nancy Thorndike Greenspan, Nature Crockatt's deft pen and thoughtful approach form an engaging and revealing image of Einstein the non-scientist. He marshals a wealth of material into a convincing narrative ... Einstein and Twentieth-Century Politics delivers what Crockatt promises: a picture of Einstein's world and mind, conveyed with an insightful brush. And these issues political and philosophical are sufficiently complex that they will surely live to see many other interpretations.


David E Rowe, Annals of Science This highly informative study makes compelling reading for anyone curious about Einstein's place on the spectrum of 20th-century political thought.

Born in Scotland in 1947, Richard Crockatt studied English Language and Literature at Edinburgh University. After two years in Germany he studied for a D.Phil at Sussex University on the topic of American liberalism. In 1978 he was appointed lecturer in American History at the University of East Anglia from which he retired as professor in 2011. Specialising in American foreign policy and international relations in the twentieth century, he is author of The Fifty Years War: The United States and the Soviet Union in World Politics, 1941-1991 (1995), America Embattled: September 11, Anti-Americanism, and the Global Order (2003), and After 9/11: Cultural Dimensions of American Global Power (2007). He has also published throughout his career in the field of intellectual history.

Introduction 1: The Making of a Global Public Intellectual 2: Foundations of Thought: Principles, Privacy, and Performance 3: Pacifism 4: Zionism and Israel 5: The Bomb and the Arms Race 6: World Government 7: Freedom and Cold War Politics Conclusion