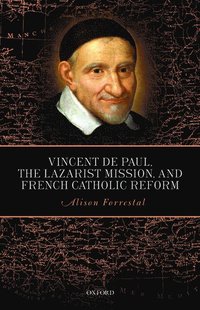 Colin Jones, English Historical Review Alison Forrestal's excellent new monograph that focuses on the core of St Vincent's life's work, namely, the establishment and diffusion of the Congregation of the Mission (or Lazarists). As well as drawing on recent scholarship, the work is based on very extensive research not only within the archives of the Mission, but also in over a score of other archives (including more than a dozen departmental archives).


Brian Boosel, Saint Vincent College, Catholic Historical Review Alison Forrestal's exploration of the life of Vincent de Paul and the Lazarist Mission is fresh and presents a new facet within the larger study of Vincentiana...Scholars of early modern French Catholicism will find in Forrestal's bibliography a treasure trove of sources in English, French, and other European languages. Any serious scholar of de Paul, de Marillac, the Catholic Reformation, or Early Modern France in general would benefit greatly from a
thorough reading of Forrestal's research.


Mita Choudhury, H-France Forrestal's work is important in locating the iconic Vincent de Paul within the complex world of Catholic Renewal. She not only shows how de Pauls activities were embedded in Old Regime practices but also highlights how the Lazarist mission contributed to the rise of the absolutist state.


R. Po-chia Hsia, American Historical Review Forrestal's study is an excellent work of scholarship. With extensive research in French and foreign archives, she has offered the reader a sober and balanced narrative of the life and work of Vincent de Paul. More importantly and this, in my view, is the greatest contribution of her book she has painstakingly and skillfully reconstructed the different networks that enabled de Paul to build and extend his missionary enterprise ... Forrestal's biography of
Vincent de Paul is likely to become a classic work of this influential figure in seventeenth century French Catholicism.


Nicole Reinhardt, French History Alison Forrestal's excellent new study contextualizes Vincent de Paul's trajectory from unknown, benefice-hunting priest to member of the highest-ranking royal council responsible for the appointment of French bishops towards the end of his life. Exploring a wealth of regional archives next to those of the Congrgation de la Mission, she is the first to deliver a critical historical study of Vincent de Paul and the Lazarists outside hagiographic
parameters and which is fully embedded in the current historiographical horizon of the debate on Catholic Reform and French social and political history.


Mita Choudhury, H-France Forrestal's work is important in locating the iconic Vincent de Paul within the complex world of Catholic Renewal. She not only shows how de Paul's activities were embedded in Old Regime practices but also highlights h...

Alison Forrestal is Lecturer in Early Modern History at the National University of Ireland, Galway (NUIG), having previously held lectureships at Durham University and the University of Warwick. She is the author of multiple publications on the Catholic Reformation, including the monographs Catholic Synods in Ireland, 1600-1690 (1998), and Fathers, Pastors and Kings: Visions of Episcopacy in Seventeenth-Century France (2004), and the co-edited volumes Politics and Religion in Early Bourbon France (2009), and The Frontiers of Mission: Perspectives on Early Modern Missionary Catholicism (2016).