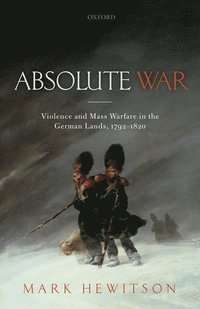 av Mark Hewitson
Inbunden Engelska, 2017-02-09
919
Köp
Spara som favorit
Skickas inom 10-15 vardagar.
Fri frakt inom Sverige för privatpersoner.
Finns även som
Visa alla 2 format & utgåvor
The first of three volumes from Mark Hewitson which explore the experiences of conflict in modern Germany, and the resounding impact of these across Europe and the world, Absolute War reassesses the meaning of military conflict for the millions of German subjects who were directly implicated in the Revolutionary and Napoleonic Wars.
Visa hela texten


James Sheehan Journal of Modern History Mark Hewitson's achievements are formidable... these two books are a treasure trove of insights and information from which scholars will benefit for years to come.


German Historical Institute London Bulletin These two volumes are clearly structured, fluently written, and open up a broad panorama of contemporary German views on violence and warfare. ... We can look forward to the third volume in the trilogy.

Mark Hewitson is a Professor of German History and Politics, and Director of European Social and Political Studies at University College London. His publications include monographs on National Identity and Political Thought in Germany (2000), Germany and the Causes of the First World War (2004), Nationalism in Germany, 1848-1866 (2010), and History and Causality (2014). He is the co-editor of What is a Nation? Europe, 1789-1914 (2006, with Timothy Baycroft), and of Europe in Crisis: Intellectuals and the European Idea, 1917-1957 (2012, with Matthew D'Auria).

Introduction: Theories of War and Violence 1: From Cabinet Warfare to Mass Armies 2: Heroism and the Defence of the Volk 3: The Violence of Civilian Life 4: The Lives of Soldiers 5: War Memories Conclusion: A History of Remembering and Forgetting