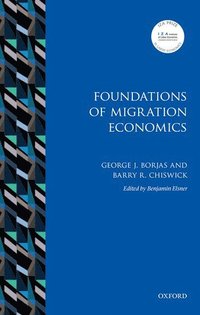 George J. Borjas is the Robert W. Scrivner Professor of Economics and Social Policy at the Harvard Kennedy School. He was awarded the IZA Prize in Labor Economics in 2011. Professor Borjas is a Research Associate at the National Bureau of Economic Research and a Research Fellow at IZA. He is the author of several books, including Immigration Economics (Harvard University Press, 2014), Heaven's Door: Immigration Policy and the American Economy (Princeton University Press, 1999), and the widely used textbook Labor Economics (McGraw-Hill, 2016), now in its seventh edition. His latest book is We Wanted Workers: Unraveling the Immigration Narrative, (W.W. Norton, 2016). He has also published over 150 articles in books and scholarly journals. In 2016, Politico listed Professor Borjas #17 in the list of the 50 "thinkers, doers and visionaries transforming American politics...For telling it like it really is on immigration". Barry R. Chiswick is a Professor of Economics and Professor of International Affairs at the George Washington University, Washington, D.C. He has published numerous scholarly books, research articles, book chapters, and op-ed newspaper articles. He has received numerous awards for his pioneering research in Labor Economics, with an emphasis on human capital, income distribution, the adjustment and impact on the host economy of immigration, the economics of language, and the human capital and labor market achievements of racial, ethnic, and religious minorities, among other topics. Professor Chiswick has had an impact on the public policy debate on international migration through his research, op-ed newspaper and magazine articles, his testimony before both houses of the U.S. Congress, his media interviews, and his consulting for various government agencies. Benjamin Elsner is an Assistant Professor of Economics at University College Dublin. His main research lies at the intersection of labor economics, public economics and microeconometrics. While his earlier work mainly studied the economic impacts of migration, his current research agenda focuses on the determinants of people's investment in human capital and the impact of these investments on life outcomes such as health, educational attainment and success in the labor market. Before joining UCD, Elsner acted as a Senior Research Associate at IZA in Bonn, where he focused on migration and integration topics. He continues to serve as IZA Deputy Program Co-ordinator of the Labor Mobility program area. He is also a research fellow at the Centre for Research and Analysis of Migration (CReAM) and the Geary Institute for Public Policy.

Part I: Introduction by the Editor Part II: Assimilation 1: The effect of Americanization on the earnings of foreign-born men 2: Assimilation, changes in cohort quality, and the earnings of immigrants 3: Is the new immigration less skilled than the old? 4: Seld-selection and the earnings of immigrants 5: Human capital and the labor market adjustment of immigrants: testing alternative hypotheses 6: Are immigrants favorably self-selected? An economic analysis 7: The 'negative' assimilation of immigrants: a special case Part III: Ethnic networks and neighborhoods 8: The self-employment experience of immigrants 9: Differences in education and earnings across racial and ethnic groups: tastes, discrimination, and investments in child quality 10: Ethnic capital and intergenerational mobility 11: Ethnicity, neighborhoods, and human-capital externalities 12: Ethnic networks and language proficiency among immigrants 13: Do enclaves matter in immigrant adjustment Part IV: Language and human capital 14: Speaking, reading, and earnings among low-skilled immigrants 15: Educational mismatch: are high-skilled immigrants really working in high-skilled jobs, and what price do they pay if they are not? Part V: Impact on the economy 16: The economic benefits from immigration 17: The labor demand curve is downward sloping: reexamining the impact of immigration on the labor market 18: Does immigration grease the wheels of the labor market 19: Native internal migration and the labor market impact of immigration Part VI: Our view on migration