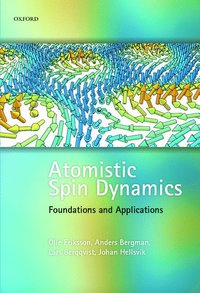 Joachim Sthr, Stanford University, USA This is a much needed book that advances our understanding of magnetism and especially spin dynamics from a first principles atomistic point of view. It presents a state-of-the art discussion of the exciting theoretical developments that have occurred over the last 20+ years, accompanying experimental discoveries of spin based phenomena and their practical utilization.

Olle Eriksson received his PhD at the Physics Department, Uppsala University, in 1989. After spending three years in Los Alamos as a post doc he returned to the Physics Department, Uppsala University in 1992 where, he has worked ever since. Eriksson's research interests lies in materials theory, electronic structure theory, correlated electron physics, as well as theory of magnetism and magnetic materials. He has been active in this field for over thirty years. Eriksson received a chair professorship in Theoretical Magnetism, in 2002. Anders Bergman received his PhD in Physics at Uppsala University in 2006 on the subject of magnetic properties in nanostructured materials. After the PhD he has had postdoc positions at CEA Grenoble, France, KTH Royal Institute of Technology, Stockholm and at Uppsala University. Currently Dr. Bergman is a researcher at Uppsala University where his main topics includes method development of electronic structure calculations and numerical studies of the magnetization dynamics of low-dimensional systems, topological magnets and chiral magnetis and related systems relevant for information processing applications. Lars Bergqvist received his Ph D in physics at Uppsala University 2005. He was a postdoc at Research Center Julich, Germany between 2005-2009, assistant professor at Uppsala University between 2009-2010 and since 2010 situated at KTH Royal Institute of Technology. His present research interests are energy efficient materials, in particular thermoelectrics, and magnetization dynamics in low dimensional and bulk systems with special focus on method development of finite-temperature magnetism. Johan Hellsvik received his PhD in physics from Uppsala University in 2011. He has been a postdoc at CNR-SPIN, L'Aquila, and at ISC-CNR Sapienza, Rome. Early research projects involved studies on the spin dynamics of spin glasses and diluted magnetic semiconductors. His present research activity is on the topics of multiferroic materials, ultrafast magnetization dynamics, and frustrated magnetism.