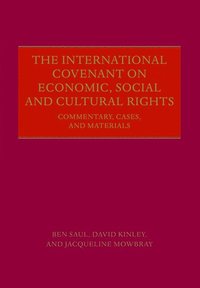 The International Covenant on Economic, Social and Cultural Rights

Norman Wei, German Yearbook of International Law A very useful, up-to-date, and well-researched source of information, providing detailed reasoning from a broad variety of cases and materials... This ICESCR Commentary can be recommended for scholars and practitioners.

Philip Alston, New York University The publication of this volume marks something of a coming of age for the International Covenant on Economic, Social and Cultural Rights.... scholarly contributions are crucial for the development of a coherent, systematic, and persuasive jurisprudence relating to economic, social and cultural rights. This volume performs a formidable service by providing such an insightful synthesis of the most important elements of this emerging jurisprudence. It also helps to
expose the relative paucity in the literature of engaged but critical analyses of this jurisprudence, and thus highlights the need for the next generation of scholars to engage in a more robust and challenging way with the materials brought together in this volume.

Hilary Charlesworth, Australian National University This book will quickly become an essential companion to anyone interested in this field. It offers a comprehensive and nuanced account of the rights set out in the Covenant, explaining their historical and jurisprudential context and how they have been and might be deployed. It unpacks the concept of 'progressive realisation' of economic, social and cultural rights. The book transcends the rather static debates between supporters and critics of the Covenant by
focussing on how its rights have been protected in practice and the authors emphasise the limits of a narrow legal approach in this area. This is a book packed with important information and sophisticated analyses and it will change the way that the Covenant is understood.

Zdzislaw Kedzia, Chairperson, UN Committee on Economic, Social, and Cultural Rights 2012-14 Treaty bodies terribly need the input from the research carried out by academia and other institutions, including non-governmental ones. [This] Commentary [is] highly valuable, up-to-date, comprehensive, and rooted in the global expertise input. I am sure that it will serve individuals and groups, the Committee and regional and national human rights bodies, government officials, judges and lawyers, researchers, NGOs and the wider civil society. At the launch of
Manfred Nowak's similar commentary on the Covenant on Civil and Political Rights, a great specialist and human rights advocate, Professor Felix Ermacora wished the author that his commentary would be quoted just as "Nowak " since this is the expression of the highest recognition for and a prove of actual
importance of a legal commentary. I am convinced [this commentary will be known henceforth as] Saul, Kinley, and Mowbray.

Ben Saul is Professor of International Law and an Australian Research Council Future Fellow at the University of Sydney. Ben has expertise on global counter-terrorism law, human rights, the law of armed conflict, and international criminal law. He has published 10 books, 75 scholarly articles, and hundreds of other publications and presentations, and his research has been used in national and international courts. Ben has taught law at Oxford, the Hague Academy of International Law and in China, India, Nepal and Cambodia, and has been a visiting professor at Harvard Law School. Ben practises as a barrister in international and national courts, has advised various United Nations bodies and foreign governments, has delivered foreign aid projects, and often appears in the media. He has a doctorate in law from Oxford and honours degrees in Arts and Law from Sydney. Professor David Kinley holds the Chair in Human Rights Law at University of Sydney. He is also an Academic Panel member of Doughty Street Chambers in London, a member of the Australian Council for Human Rights, and was a founding member of Australian Lawyers for Human Rights. He is currently on the Faculty of Oxford/George Washington Universities' International Human Rights Law Summer School and has previously held teaching positions at Cambridge University, ANU, University of New South Wales, Washington College of Law, American University, and Paris 1 (La Sorbonne). He was also the founding Director of the Castan Centre for Human Rights Law at Monash University (2000-2005). David was a Senior Fulbright Scholar in 2004, based in Washington DC, and the Herbert Smith Visiting Fellow at the Faculty of Law, University of Cambridge in 2008. He has written and edited eleven books and more than 100 articles, book chapters, reports and papers. Jacqueline Mowbray is a Senior Lecturer in Law and Co-Director of the Sydney Centre for International Law at the University of Sydney. She is a graduate of the Universities of Queensland (BA LLB (Hons)), Melbourne (LLM) and Cambridge (LLM (Hons) PhD). Jacqueline has practised as a solicitor with Freehills in Melbourne and Barlow Lyde & Gilbert in London, and she teaches on the European Masters program in human rights, which is taught at the University of Sarajevo, Bosnia-Herzegovina. Her particular area of interest is international law and legal theory, with a focus on international human rights law. She is currently working on a number of projects relating to international law and language policy, and the position of linguistic minorities under international law. Jacqueline also teaches in the area of commercial law and international commercial transactions.