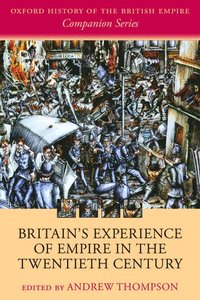 Britain's Experience of Empire in the Twentieth Century

Emily Baughan, Twentieth Century British History Britain's Experience of Empire is an important volume. It is thorough, accessible, and presents the first collected study of the impact of empire upon Britain's twentieth century. Moreover, in grappling with the effect upon Britain not only as being, but also of having been, an imperial power this book becomes part of the history it intends to write. It presents a thoughtful and balanced survey of a subject that inspires regular and impassioned debate. As
such, Britain's Experience of Empire in the Twentieth Century should be welcomed alike by those within, and outside, the academy.

G. M. Stearns, CHOICE This companion volume to The Oxford History of the British Empire series is a valuable contribution to the growing field of imperial and postimperial studies. It provides a detailed examination of how the empire was experienced in 20th-century Britain, how and why it mattered, the demands it made, and how it shaped the British world outlook.

Nicholas Owen, Journal of Contemporary History a very useful counter to those loud voices that fill the newspapers with confident and overly simple assertions of what the empire did or did not do to the British ... offers a way of thinking of imperialism in relational terms which might add a further dimension to debates concerning impact and influence.

Dane Kennedy, George Washington University This volume is essential reading for anyone interested in what the empire and its loss meant to Britain in the twentieth century-and, indeed, what it continues to mean today. Andrew Thompson and his contributors provide a wide-ranging, well-balanced, and highly illuminating assessment of the subject. It will engage and inform specialists, students, and general readers alike

Bloggat om Britain's Experience of Empire in the Twe...

Andrew Thompson's previous publications include The Empire Strikes Back? The Impact of Imperialism on Britain from the Mid-Nineteenth Century (2005) and Empire and Globalisation. Networks of People, Goods and Capital in the British World, c.1850-1914 (2010). He is currently a Council member of the Arts and Humanities Research Council, and serves on the editorial boards of South African Historical Journal and Twentieth Century British History.

1: Andrew Thompson: Introduction 2: Philip Murphy: Britain as a Global Power in the Twentieth Century 3: Jeffrey Cox: From the Empire of Christ to the Third World: Religion and the Experience of Empire in the Twentieth Century 4: Wendy Webster: The Empire Comes Home: Commonwealth Migration to Britain 5: Richard Whiting: The Empire and British Politics 6: Jim Tomlinson: The Empire/Commonwealth in British Economic Thinking and Policy 7: Andrew Thompson with Meaghan Kowalsky: Social Life and Cultural Representation: Empire in the Public Imagination 8: Krishan Kumar: Empire, Nation, and National Identities 9: Andrew Thompson: Afterword: The Imprint of the Empire