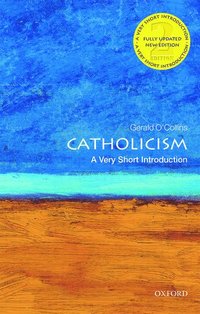 av Gerald O'Collins
Häftad Engelska, 2017-05-25
89
Köp
Spara som favorit
Skickas inom 10-15 vardagar.
Fri frakt inom Sverige över 159 kr för privatpersoner.
Finns även som
Visa alla 1 format & utgåvor
What are the origins of the Catholic Church? How has Catholicism changed and adapted over the centuries? What challenges does the Catholic Church face in the twenty-first century? Gerald O'Collins answers these and other questions, and in this new edition considers the impact of Pope Francis' leadership of the Church since 2013.
Visa hela texten

Jean Vanier, Founder of L'Arche This is an excellent little book which reveals the heart of Catholicism, written by a theologian steeped in the vision of Vatican II and Pope Francis. It would be important reading not only by those who do not profess this faith but also by all those who do.

Gerald O'Collins, SJ, PhD (Cantab.) is Adjunct Professor of the Australian Catholic University, a research fellow of the University of Divinity (Melbourne), and Professor Emeritus of the Gregorian University (Rome), where he taught for 33 years and also served as Dean of the Faculty of Theology. He has written or co-written 67 books, including Catholicism: The Story of Catholic Christianity (OUP, 2004), Salvation for All (OUP, 2008), and The Second Vatican Council on Other Religions (OUP, 2013). He has authored hundreds of articles in professional and popular journals, and lectured at many universities and colleges worldwide. In 2006 he was created a Companion of the General Division of the Order of Australia (AC), the highest civil honour granted through the Australian government.