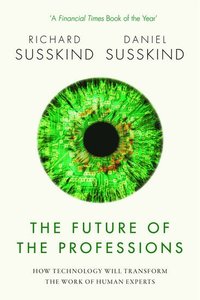 The Future of the Professions

How Technology Will Transform the Work of Human Experts

av Richard Susskind
(2 röster)
Häftad Engelska, 2017-02-23
123
Köp
Spara som favorit
Finns även som
Visa alla 4 format & utgåvor
The Future of the Professions predicts the decline of today's professions and introduces the people and systems that will replace them. In an internet-enhanced society, we will neither need nor want doctors, teachers, accountants, architects, the clergy, lawyers, and many others, to work as they did in the 20th century.
Visa hela texten

Jonathan Westover, Utah Valley University, Sociological Research Online Richard Susskind and Daniel Susskind's recent work, The Future of the Professions: How Technology Will Transform the Work of Human Experts, is a fascinating and very thought-provoking book

Professor Richard Susskind OBE is an author, speaker, and independent adviser to international professional firms and national governments. He is President of the Society for Computers and Law, IT Adviser to the Lord Chief Justice of England, and Chair of the Advisory Board of the Oxford Internet Institute. His numerous books include the best-sellers, The End of Lawyers? (OUP, 2008) and Tomorrow's Lawyers (OUP, 2013), his work has been translated into more than 10 languages, and he has been invited to speak in over 40 countries. Daniel Susskind is a Lecturer in Economics at Balliol College, Oxford, where he teaches and researches, and from where he has two degrees in economics. Previously, he worked for the British Government - in the Prime Minister's Strategy Unit, in the Policy Unit in 10 Downing Street, and as a Senior Policy Adviser at the Cabinet Office. He was a Kennedy Scholar at Harvard University.