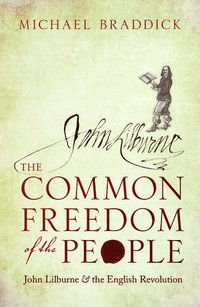 The Common Freedom of the People

John Lilburne and the English Revolution

Rachel Hammersley, The Times Literary Supplement Braddick presents Lilburne as an activist rather than a political thinker, as primarily concerned with tactics and political mobilization. Lilburne's ideas are interesting but, his real significance and legacy - Braddick suggests - are in the realm of political practice


David Horspool, The Spectator [The Common Freedom of the People] is a triumph of sympathetic biographical writing, without succumbing to the biographer's trap of sticking up for everything his subject did or stood for.


Edward Vallance, Literary Review [An] excellent new biography ... Braddick is able to introduce the reader very succinctly and clearly to the wider context in which Lilburne's ideas were formed. This is no mean feat given the complexity and rapidity of the political changes of the period.


Kwasi Kwarteng, The Sunday Times Clear and accessible, wise and measured ... The Common Freedom of the People is an important book.


Jackie Eales, History Today Braddick provides a richly analysed context for Lilburne's public battles against the misuse of power. Yet, while admiring Lilburne's personal conviction and courage, Braddick rightly warns against seeing him as a modern reformer ... he depicts Lilburne as a man of principle, willing to sacrifice family life to battle justice for the greater good of England.


Matthew Reisz, Times Higher Education This political life [provides] a vivid portrait of both the man and his age.


John Walter, Emeritus Professor, University of Essex John Lilburme was a polemicist and martyr unafraid to speak truth to power. Michael Braddick's masterly political biography offers an exciting new reading of the significance of his career as a political activist, and of his lasting legacy on both sides of the Atlantic.


J.C. Davis, Journal of the Northern Renaissance A comprehensive political life [of Lilburne] by one of this generations most distinguished and productive historians of the English Revolution... meticulously researched and unlikely to be exceeded in its recovery of many aspects of Lilburne's life...

Bloggat om The Common Freedom of the People

Michael Braddick is Professor of History at the University of Sheffield, and has held academic positions and visiting Fellowships in the USA, France, and Germany. He has published widely on the social, political, and economic history of British and American society in the sixteenth and seventeenth centuries. His most recent book is God's Fury, England's Fire (2008).