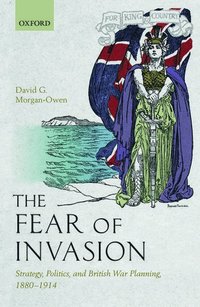 The Fear of Invasion


David French, Journal of Modern History Morgan-Owen has brought out more clearly, and in much greater detail than previous authors, the chaotic and unmanaged interaction between the two services when they contemplated how to deter an invader.


Prof Matthew Seligmann, War in History The Fear of Invasion is a landmark study... These are paradigm-changing conclusions.


Prof Gary Sheffield, Stand to! Occasionally a book comes along that offers important new insights into a supposedly familiar subject. David G Morgan-Owen's masterly The Fear of Invasion is such a work.


Dr Jonathan Boff, English Historical Review an impressive debut monograph which finds a fresh approach...and establishes him as an historian to watch


Professor Christoper Bell, Twentieth Century British History this book represents a major correction to the orthodox interpretation of British naval policy presented in Arthur Marder's seminal works on the Royal Navy. It also demolishes the central arguments of the controversial 'revisionist' school of naval historians. Given the volume of scholarly attention lavished on the problem of British strategy on the eve of the First World War, this is an impressive achievement.


Christian Melby, Reviews in History a brilliantly argued and impressively well-researched monograph. Morgan-Owen's book will doubtless become a key reference alongside existing works on pre-Great War British war planning, and offers important new insight into the workings of the political and military leadership who tried to decide how to pursue an offensive military policy while also defending the heart of the empire itself.


Commander Kevin Rowlands RN, The Naval Review There is a wealth of detail in The Fear of Invasion, which takes the reader through a tale of Victorian and Edwardian inter-service rivalry, febrile national politics, huge defence budgets but a painful lack of readily available cash, seemingly unending overseas commitments and a global scene that was at best confusing and at worse downright dangerous. Delete the words 'Victorian and Edwardian' and the thoughtful reader could easily start to draw parallels
to today. That is one of the joys of well-written history: without necessarily setting out to do so, it allows us to take stock of our own woes and, if we are lucky, start to see a way through them. Unfortunately, a century ago the conglomeration of strategy, politics and military planning throughout Europe
led to catastrophic war. We must hope that the ...

Bloggat om The Fear of Invasion

David G. Morgan-Owen is a lecturer in Defence Studies at King's College London. He was previously a Visiting Research Fellow at the National Museum of the Royal Navy, Portsmouth, and an Associate of the Centre for Maritime Historical Studies at the University of Exeter, where he gained his PhD in 2013. Dr. Morgan-Owen has published on British strategy before and during the First World War in the English Historical Review, War in History, Journal of Strategic Studies, and the International History Review.

Introduction 1: The Command of the Sea 2: The Military Resources of the Empire 3: 'Practical Politics' 4: Preparing for War 5: The German Threat 6: The North Sea Guard 7: A Growing Burden 8: Surrendering the Initiative Conclusion