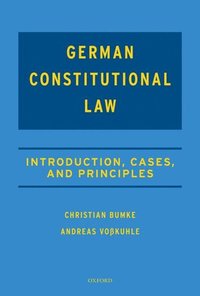 Christian Bumke is Professor of Public Law and Foundations of Law at Bucerius Law School, Hamburg. His published work includes The Development of the Fundamental Rights (2009). Andreas Vosskuhle is the President of the Federal Constitutional Court of Germany, and Professor of Public Law, General Theory of the State, and Legal Philosophy at the University of Freiburg. He has published widely on comparative constitutional law and the cooperation of constitutional courts.