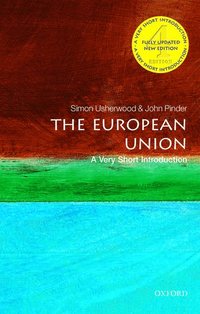 av Simon Usherwood
Häftad Engelska, 2018-01-25
95
Köp
Spara som favorit
Skickas inom 10-15 vardagar.
Fri frakt inom Sverige över 159 kr för privatpersoner.
Fully updated to include the migrant crisis, the UK's decision to leave the Union, and the state of the Euro currency, this accessible Very Short Introduction shows how and why the EU has developed, how its institutions works, and what it does - from the single market to the Euro, and from agriculture to peace-keeping and the environment.
Visa hela texten

Professor Anand Menon, Kings College and Director, UK in a Changing Europe This slim little volume is quite simply the best place to start for anyone who aspires to understand the European Union.

Simon Usherwood is Reader in Politics at the University of Surrey, where he specialises in the study of euroscepticism, and in UK-EU relations. As well as publishing widely in these areas, he has also been a frequent contributor to public debate, through the media, social media and numerous public speaking events. Since 2016, he has been a Senior Fellow of the 'UK in a Changing Europe' programme. John Pinder was Honorary Professor at the College of Europe, and Chairman of the Federal Trust, London. He was the author of The Building of the European Union (Third edition, OUP, 1998).