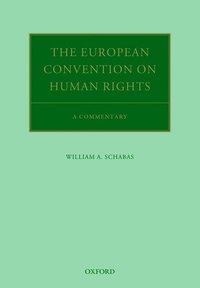 The European Convention on Human Rights

Sir Nicolas Bratza, the former President of the European Court of Human Rights The Commentary is...among the finest published works on the Convention. It is, as one would expect, written with the erudition and authority of someone whose entire professional life has been closely associated with the international protection of human rights and with the Convention system. It is also a very well-structured work and the discussion of each Article of the Convention, both substantive and procedural, is prefaced with an invaluable introductory comment
and a note on the drafting of the provision... More than that it is a pleasure to read... I welcome the Commentary without reservation and congratulate Professor Schabas very warmly for a work which will I predict swiftly become not only a leading work on the Convention system but an indispensable
resource for all interested in what he calls one of the greatest stories of success in the modern protection of human rights.