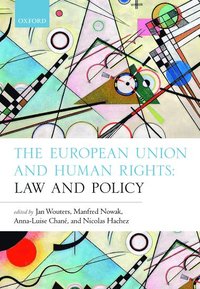 The European Union and Human Rights

av Jan Wouters
Inbunden Engelska, 2020-12-17
1449
Köp
Spara som favorit
Skickas inom 7-10 vardagar.
Gratis frakt inom Sverige över 159 kr för privatpersoner.
EU commitment to human rights policies has grown following the Lisbon Treaty. Taking stock of those developments, this book describes the framework, actors, policies, and strategies of human rights across the EU and how their impact is felt. Contributed to by scholars from across the EU, this provides an in-depth and holistic view of the issues.
Visa hela texten

Jan Wouters is Full Professor of International Law and International Organizations, Jean Monnet Chair ad personam EU and Global Governance, and founding Director of the Institute for International Law and of the Leuven Centre for Global Governance Studies, an interdisciplinary research centre with the status of both a Jean Monnet and KU Leuven Centre of Excellence, at KU Leuven. He is also President of KU Leuven's Council for International Policy. He is a Visiting Professor at Sciences Po (Paris), Luiss University (Rome) and the College of Europe (Bruges), and an Adjunct Professor at Columbia University He has published widely on EU and international law, international organizations and global governance. He is Of Counsel at Linklaters, Brussels, and a Member of the Belgian Royal Academy. Manfred Nowak is Secretary General of the European Inter-University Centre for Human Rights and Democratisation in Venice and Professor for International Human Rights at the University of Vienna. He is co-director of the Ludwig Boltzmann Institute of Human Rights in Vienna. He served as UN Special Rapporteur on Torture from 2004 to 2010. In October 2016, he was appointed as independent expert leading the UN Global Study on Children Deprived of Liberty. He is author of over 600 books and articles in the field of human rights. Anna-Luise Chane is a Research Fellow at the Leuven Centre for Global Governance Studies and at the Institute for International Law (KU Leuven), and Project Manager of the large-scale Horizon 2020 Project RECONNECT (<"Reconciling Europe with its Citizens through Democracy and Rule of Law>"). Her research focuses on the relationship between multilateral organizations, in particular the United Nations and the EU, on the EU and human rights, and on human dignity in the case law of international courts and tribunals. Anna-Luise studied law at the University of Cologne and the University of Leuven and passed her First and Second Juridical State Examination with distinction. She holds a Master of Laws degree from Harvard Law School, where she was an ERP Scholar of the German Ministry of Economy and Technology and the German National Academic Foundation. Dr Nicolas Hachez was the manager of the FRAME project (www.fp7-frame.eu) from 2013 to 2017. Nicolas is currently Associate Fellow at the Leuven Centre for Global Governance Studies and was previously Lecturer in EU and international law at KU Leuven (2017-2018), Senior Researcher at the Leuven Centre for Global Governance Studies (2008-2018), and Associate Attorney in the Brussels office of an international law firm (2004-2008). Nicolas' research lies at the intersection between international economic law and international human rights law and appeared in numerous international books and journals.