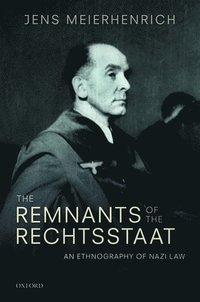 The Remnants of the Rechtsstaat

An Ethnography of Nazi Law

av Jens Meierhenrich
Inbunden Engelska, 2018-03-01
659
Köp
Spara som favorit
Kan tyvärr inte längre levereras innan julafton.
Finns även som
Visa alla 2 format & utgåvor
This book offers an intellectual history of Ernst Fraenkel's classic The Dual State (1941), recently republished by OUP, and one of the most erudite books on the theory of dictatorship ever written. It was the first comprehensive analysis of the nature and rise of Nazism, and the only such analysis written from within Hitler's Germany.
Visa hela texten

Michael Stolleis, Professor of Public Law Emeritus, University of Frankfurt, and formerly Director of the Max-Planck-Institute for European Legal History As early as 1938, Ernst Fraenkel, a German labor lawyer and social democrat chased out of Germany because of his Jewish origin attempted an analysis of Nazi law. He argued that law and lawlessness existed side-by-side, and deviously complemented one another. Meierhenrich has carefully and admirably excavated this intellectual achievement, and reimagined Fraenkels dual state for the twenty-first century. This is a terrific book and of immediate relevance for
understanding the present: dual states are everywhere.


David Dyzenhaus, University Professor of Law and Philosophy, University of Toronto The Remnants of the Rechtsstaat is an essential companion to Ernst Fraenkels The Dual State. This work of 1941 set out a valuable analysis of the prerogative state part of the Nazi state. Meierhenrich sets that analysis in its rich context and effectively shows its relevance to an understanding of contemporary authoritarianism. In an era in which the rule of law is increasingly under threat, this book is an immense contribution.


John P. McCormick, Professor of Political Science, University of Chicago One would have hoped that in our own time a rigorous analysis of Nazi law would serve only antiquarian purposes. However, Jens Meierhenrich's magnificent The Remnants of the Rechtsstaat serves as a painful reminder that this is unfortunately not the case. In this brilliant and meticulous reevaluation of Ernst Fraenkel's interrogation of the workings of the Third Reich's legal system, Meierhenrich revives the idea that authoritarian regimes are not in fact
lawless entities, but in fact states that deploy legalism in both cynical and systematic ways. In an era when hybrid regimes, which combine both dictatorial and liberal elements, proliferate throughout the world - in Europe and North America, as well The Remnants of the Rechtsstaat is an indispensable read.


Duncan Kelly, Reader in Political Thought, University of Cambridge. Jens Meierhenrich has written a remarkable book. Working towards a wider account of what remained of rational law under National Socialism, and what might still remain of rational law under conditions of authoritarianism more generally, he has excavated the ways in which the remnants of the Rechtsstaat exist within both regime types. He has done so, moreover, by rehabilitating and furthering a classic idea formulated most famously in Ernst Fraenkels powerful book,
The Dual State, about the normative and prerogative dimensions of law and politics under radical duress... Meierhenrichs own ethnography of Nazi law uses Fraenkels example to teach us once again just what was so important about that book and its author, and why political theorists, legal theorists, and
historians, as well as scholars of the Third Reich, might profitably return to him anew for lessons tha...

Jens Meierhenrich is Associate Professor of International Relations at the London School of Economics and Political Science, and previously taught for a decade at Harvard University. His books include The Legacies of Law, which won the American Political Science Association's 2009 Woodrow Wilson Foundation Award for the best book in politics, government, or international affairs; and, as co-editor, The Oxford Handbook of Carl Schmitt.

Introduction: The Remnants of the Rechtsstaat 1: Behemoth and Beyond: Theories of the Nazi State 2: The Making of a Cause Lawyer 3: The Debate about the Rechtsstaat in Nazi Germany, 1933-1936 4: An Ethnography of Nazi Law: The Gestation of The Dual State, 1936-1941 5: "A Rational Core within an Irrational Shell": An Institutional Theory of Dictatorship 6: The Decline of a Classic: Explaining the Reception of The Dual State Conclusion: Authoritarian Rule of Law